Young New Zealanders Should Be Welcomed at the Polls, Even if They're 16 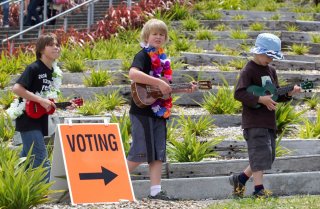 The recent decision to delay the 2020 general election has given thousands more New Zealand citizens the opportunity to vote for the first time.

But while it’s wonderful for those who turn 18 between the original election date and the new one, it does shine a spotlight on an ongoing source of inequality among New Zealand citizens: the voting age of 18 itself.

The current system disadvantages an already vulnerable and powerless group – the young. Lowering the voting age would address this. And we could start by listening to the young Kiwis who have taken their age discrimination campaign, Make it 16, to the High Court.

It’s important to recognise the voting age limit of 18 for what it is – a procedural decision: 18 is a convenient number that happens to coincide with some (but not all) other age limits for the granting of rights in our society.

Procedural decisions aren’t necessarily bad. It might, for example, make sense to limit the ability to gain a driver’s licence to those 16 years of age or older.

This isn’t to claim that no-one under 16 could ever be capable of driving. Rather, the age limit of 16 is a reasonable imposition on an activity and can be justified by appeal to the development of certain capacities.

Read more: Populism from the Brexit and Trump playbooks enters the New Zealand election campaign – but it's a risky strategy

Why then don’t we let people vote until they are 18?

Some might say younger citizens aren’t capable of voting well and so shouldn’t be entitled to. Maybe under-18s don’t pay enough attention to political news, or maybe they just can’t make political decisions.

This line of reasoning runs into multiple problems. If we really care about people being capable of voting well, then an age limit of 18 doesn’t provide sufficient guidance. Young people don’t receive powers of political reasoning as a magical 18th-birthday gift. In reality, they develop the skills over time and 18 is merely when we recognise them.

So, even if it’s true that some people can’t vote well and therefore shouldn’t vote at all, this line of reasoning begs the question about the voting age. It assumes, wrongly, that 18 is a good place to draw the line.

That isn’t the only problem. We should and do allow those with severe cognitive disabilities to vote once they are 18, despite many of these people having demonstrably less capacity for political decision-making than teenagers. If capacity to vote matters, it matters for everyone, not just for young people.

Others may argue that turnout among young voters is low compared to voters in general. They are right – but so what? It isn’t clear to me that participation rates are the most important metric here. But even if we think they are, there is no reason to believe that letting younger citizens vote will cause overall rates to drop.

On the contrary, there is reason to think the opposite. Evidence from Austria, which lowered the voting age to 16 for its 2008 elections, suggests that enfranchising very young voters improves their participation rates.

Importantly for the long-term health of our democracy, once very young voters have voted, they are more likely to continue voting than those who couldn’t until they were 18.

Lowering the voting age may, in fact, benefit turnout. Voting is a habit which, once formed, is harder to break. If 16-year-olds have the desire but not the opportunity to vote, by the time they can, some percentage of them has become disengaged.

Read more: Voting is an essential service too. New Zealand can't be afraid to go to the polls, even in lockdown

By contrast, if the development of the desire to vote coincides with the ability, they are more likely to act on that desire in the moment – and to continue voting in future.

This also helps dissolve a further objection, that young people aren’t interested in politics and so are less likely to make good choices.

A legitimate reason for young people not to care about politics is that they can’t participate in the first place. Being able to vote is an incentive for younger people to learn about politics in ways they otherwise might not.

So spare a thought for those who will turn 18 just after October 17, who miss out simply because of when the election falls. We can and should do better – by recognising this inequity and working to change the voting age for 2023.