Your Cat Could Get Coronavirus (But Don't Panic) 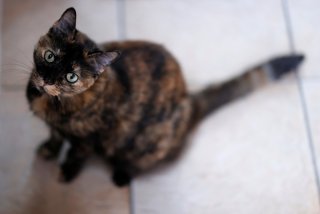 Since the outset of the coronavirus pandemic, the potential role of animals in catching and spreading the disease has been closely examined by scientists. This is because the virus that causes COVID-19 belongs to the family of coronaviruses that cause disease in a variety of mammals.

The evidence suggests that this virus arose in bats and my colleagues at the University of Glasgow have recently determined that the sub-type of coronavirus to which the virus belongs has been circulating in the bat population since the 1940s.

So it makes sense for researchers to ponder whether the virus can be transmitted to companion animals, whether these animals can show symptoms of infection, and whether they may play any role in the epidemiology of the disease.

Cats are the UK’s most popular pet – a 2019 survey revealed there are almost 11 million felines in households across the country. Public concern about felines was initially raised when tigers and lions at the Bronx Zoo in New York were found to be infected with SARS-CoV-2, the virus which causes COVID-19.

There have also been sporadic reports of cats from COVID-19 households in Hong Kong, Belgium, France, Spain and the US which have tested positive for the virus.

So, could our domestic cat population be somehow involved in this pandemic here in the UK? We decided to find out.

Searching for Coronavirus in UK Cats

In early May, my colleagues and I were given ethical approval to retrospectively test cats for SARS-CoV-2 and work soon began screening routine respiratory samples taken from cats throughout the UK. We also launched an appeal to veterinary surgeons asking for samples from suspect cases.

After screening hundreds of samples, this collaborative effort eventually resulted in the detection of a cat with SARS-CoV-2 in the south of England, which had been sampled in mid-May. Further samples submitted to our veterinary colleagues at the Animal and Plant Health Agency revealed that this cat had developed an antibody response to the virus, demonstrating that it had indeed experienced a genuine infection and confirming it was not a simple case of sample contamination.

Circumstances indicate that the cat contracted the virus from its owners, who had previously tested positive for COVID-19.

At this point, the World Organisation for Animal Health was notified by the UK Chief Veterinary Officer and the press was alerted. We are currently preparing a paper on our findings for publication.

Should I Be Worried About My Cat?

So, what does this case tell us? Our research coincided with the UK COVID-19 outbreak, focusing on cats experiencing respiratory symptoms. Our finding of a single infected individual among the hundreds screened tells us that infection in cats is relatively uncommon. This is reinforced by the fact that the other cat in the household never became infected, either by the owners or the infected cat.

Although the cat had been experiencing mild symptoms, including runny eyes and a snotty nose, these signs were consistent with feline herpesvirus infection, for which this cat also tested positive. There is no evidence that SARS-CoV-2 was making this cat ill and thankfully, the cat and its owners have all made a full recovery.

It is important to appreciate that while, to date, about 18 million people have tested positive for COVID-19, only a handful of infected cats have been detected around the world.

All available evidence suggests, therefore, that cats are not involved in spreading COVID-19. However, the importance of this type of animal surveillance work is clear, considering that a million mink have recently been culled in the Netherlands and Spain as they have been implicated in disease spread.

Our suspicion in the case of cats is that feline infections simply represent a “spill over” from the human epidemic, and we are currently analysing the genome sequence of the virus from the case we found to investigate this hypothesis.

Our results and those from other studies, such as work in the US showing experimentally infected cats were only transiently infected, can provide reassurance to the pet-owning public.

It’s very unlikely your cat has coronavirus, and if it does, it probably won’t be involved in spreading it any further.