Zimbabwe Wants to Raise Money Through a Sovereign Bond. This is a Terrible Idea 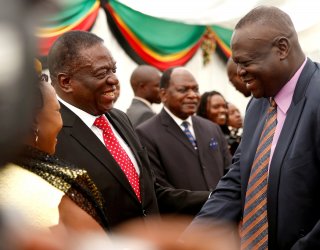 The Zimbabwean government recently signed an agreement to pay 4,500 white farmers US$3.5 billion for infrastructure improvements on the land expropriated by the government during the chaotic land reform programme of 1997/8.

The initiative shows commitment to constitutionalism and respect for property rights and restoring the rule of law. The agreement is also a noble attempt at bringing closure to a questionable episode of the country’s land history.

But the proposal to fund the exercise by issuing a sovereign bond is highly ambitious. With an ailing economy, the country simply doesn’t have the resources to meet its commitment to white farmers. In his letter dated 2 April 2020 to the heads of the International Monetary Fund (IMF), World Bank, African Development Bank (AfDB), Paris Club and European Investment Bank, Finance Minister Mthuli Ncube clearly outlined that the country does not have the medical and financial resources to fight the COVID-19 pandemic. Although the government cleared its US$107.9 million arrears with the IMF in 2016, it is still struggling to settle its US$2.2 billion debt to other international financial institutions, including the World Bank and African Development Bank.

The government has proposed issuing a long-term sovereign bond, a process where the government sells bonds to investors on either domestic or international financial markets to raise funds. This year, only Ghana, Gabon and Egypt have managed to do so.

It has also called on international donors to help it raise the needed funding. If these options do not raise sufficient funds, another proposal is to sell municipal land around the nation’s biggest cities.

In my view issuing a sovereign bond would be ill-advised. The main reasons for this are that the economic and political conditions are not conducive to an issuance of such a bond. For a country to successfully issue a sovereign bond, it needs some basics in place. It needs an international sovereign credit rating, stable domestic economic fundamentals and investor confidence. None of these are currently present in Zimbabwe.

Why it’s a Bad Idea

Most of the factors relate to internal political and economic fundamentals.

Secondly, the country has no domestic debt market. If it did, it could try to mobilise local investors who understand the associated risk exposures and could perform their own due diligence. Domestic institutional investors would have to subscribe for the government’s bond issuance to be successful.

Thirdly, the country has changed its currency more than 10 times since 2000. In 2019, the Central Bank banned the use of foreign currency for trading and reintroduced the Zimbabwe dollar quasi-currency that had been abandoned in 2009. The local currency depreciated by more than 320% in less than a year. This eroded savings and pensions, and saw a further loss of confidence in the entire financial system. Strength of a country’s currency determines the attractiveness of its bond issues. A weak currency compounds the risk of default and debt sustainability as repayments will still have to be made in foreign currency.

Fourthly, the increasing economic crisis in the country has eroded the goodwill that the current government accrued post-Mugabe era. President Emmerson Mnangagwa’s actions have failed to tally with his “open for business” mantra. His trips to Davos have failed to yield any significant foreign direct investment as investors question his credibility.

The government is also in bad favour with institutions such as the IMF and World Bank. It has defaulted on IMF loans and failed to implement reforms agreed with the organisations.

Fifth, the government has been hostile to the private sector. It ordered the closure of the stock exchange on 29 June 2020 and accused businesses of fuelling currency devaluation. State security agencies attempted to stop certain business operations of Econet and Old Mutual, the two largest companies listed on the stock exchange. They were accused of fuelling hostilities against the government. It is these companies and their multinational networks that would support the bond issuance by purchasing the government bonds.

Sixth, the government’s brand has been damaged by a number of government officials being targeted for sanctions. Some are calling for stronger sanctions for human rights abuses. Investors perceive a country that does not respect its rule of law as unlikely to respect its sovereign bond covenants nor honour its obligations on time.

In addition, the government’s commitment to transparency and integrity has been called into question on the back of accusations of mass corruption. Despite promises, there has been little to no action against government officials embroiled in corruption scandals.

Seventh, Zimbabwe’s economy has failed to pick up in the post-Mugabe era. Instead, it has become worse. Food production is at its all time low, the health sector has been paralysed by constant protests and inflation has been estimated at more than 800%.

The last internal factor to consider is that the country’s central bank can no longer perform its functions as the lender of last resort and facilitating cross-border transactions, because of the lack of foreign exchange reserves. Forex access has been restricted to government agencies, departments and selected individuals. Local banks technically have the liberty to make their own forex transaction arrangements with other international corresponding banks.

There are also some external factors that make raising capital this way a bad idea right now. The international debt market has been depressed as a result of COVID-19 and is likely to remain so for the next two years as investors wait to see how countries emerge from the crisis. And the cost of issuing a bond has doubled, which has priced most African countries out of the market. Zimbabwe is no exception.

All these factors are not favourable for Zimbabwe to issue a sovereign bond.

Zimbabwe has many pressing issues. Given that the economy is at its lowest, compensating farmers is a luxury the country cannot afford. It will not yield the implied results of increasing foreign direct investment.

Instead, Zimbabwe should focus on demonstrating the political will to restore business confidence. Evidence of this will include the removal from public office and prosecution of people involved in corruption.

It should also acknowledge the challenges it faces and commit to genuine political dialogue. International partners and investors interpret the denial of the challenges faced by the country as being dishonest and untrustworthy.

Lastly, the government should implement the economic reforms previously agreed with multilateral lenders. Under the agreement, policies should focus on eliminating the government’s double-digit fiscal deficit and adopting reforms to allow market forces to drive the functioning of foreign exchange and other financial markets. These will help stabilise the currency and monetary policy. Without fully implementing these reforms agreed with multilateral agencies, mobilising foreign direct investment will remain a dream.