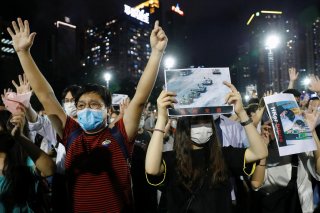 Video conferencing company Zoom removed a group of Chinese activists shortly after they held a meeting on the platform marking the anniversary of the Tiananmen Square Massacre, Axios reported Wednesday.

Activist Zhou Fengsuo, a former student leader of the Tiananmen protests in 1989, organized the May 31 event through a paid Zoom account associated with a nonprofit group he founded called Humanitarian China, according to the Axios report. Roughly 25 people based in the United States attended the event before Zoom shut down Zhou’s account on June 7.

Mothers of students who were killed during China’s 1989 crackdown on pro-Democracy activists were invited to speak during the event, as were organizers of Hong Kong’s Tiananmen candlelight vigil. Fengsuo has been unable to gain access to his account since Zoom removed it, the report noted.

Zoom faces growing scrutiny regarding its ties to China, which prohibits discussion of the protest and the government’s violent response to the demonstrations. The company acknowledged in April routing calls through Chinese servers.

“We are outraged by this act from Zoom, a U.S company,” Zhou and other organizers told Axios in a joint statement. “As the most commercially popular meeting software worldwide, Zoom is essential as an unbanned outreach to Chinese audiences remembering and commemorating Tiananmen Massacre during the coronavirus pandemic.”

Zoom usage surged among college students and Americans who were forced to work remotely amid lockdowns, which were implemented to slow the spread of the coronavirus pandemic. Reports of security vulnerabilities discovered within the application stymied that growth to an extent, leading several companies to ban its usage.

Researchers also found traffic from the app was being routed through China leading to the Taiwanese government banning the remote conferencing service. Zoom is also facing a lawsuit in California for allegedly giving away the data of users improperly to Facebook and other tech giants.

Zoom has not responded to the Daily Caller News Foundation’s request for comment.