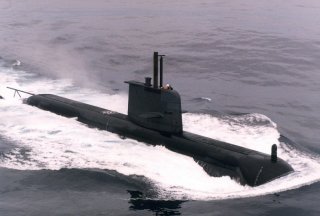 Andrew Davies and Benjamin Schreer argue in their recent ASPI report on Australia’s submarine choice that there is a stronger strategic case for acquiring Japanese submarines than European ones (Option J).

But the opposite could well be the case—having Japanese submarines could markedly reduce our strategic flexibility in prospective future scenarios. In the uncertain strategic environment that exists in the region at present, Australia should hedge its bets and avoid a regional solution that has strategic "strings attached."

Andrew and Ben acknowledge there are "strings attached" with Option J, but they don’t look sufficiently far ahead at what the region might look like in 10–30 years’ time when the new submarines will be in service.

They take an essentially short-term view of the regional security environment. They acknowledge that American power is declining in relative terms but then don’t project forward to where that trend might lead. The more you look out to the longer term, the greater are the "strings" attached to Option J.

As I have argued elsewhere, there are four main "stumbling blocks" to reaching a way ahead with the submarine program: Australia’s unique requirement for a "big" conventional submarine; the downside of locking ourselves into American systems; the difficulties in making an accurate assessment of the future strategic environment; and trends in submarine detection that may make it more difficult for Australia to deploy submarines into East Asian waters.

The geopolitics of the region are changing faster than most anticipated. Credible scenarios for the longer term must include a significant decline in American power and influence as well as conflict between China and Japan in which Australia would not take sides. In these regional circumstances, Option J would involve some loss of long-term strategic independence for Australia. The European options bring with them longer-term strategic flexibility.

Japan is an inherently insecure country. In the current strategic environment a closer security relationship between Australia and Japan is more to the benefit of Japan than it is for Australia. Placing too much emphasis on a strategic relationship with Japan suggests a strategic inferiority complex on the part of Australia. That’s not to say we shouldn’t have a security relationship with Japan, it’s only to say that we need to recognize that Japan is searching for friends for support in its fractious relationship with China. It’s not a matter of choosing sides in Northeast Asia as Andrew and Ben suggest—it’s more a matter of being able to maintain even-handed neutrality.

The argument in the ASPI report that Japan may replace China as Australia’s major trading partner is also open to question. China is also a buyer of Australia’s LNG. The report cited in the ASPI report originates from early 2014 before the global collapse in the LNG market. Latest indications are that Japan’s LNG demand is slowing as nuclear power stations come back on line under the Abe administration.

The last issue is the need to anticipate future developments in submarine detection systems and signal processing. The seas are becoming more transparent. Over the life of the new submarine, it may become impossible for Australia to deploy submarines covertly through the northern archipelagos and into the East Asian seas. Indonesia attaches considerable importance to monitoring naval movements through its archipelago but in the past, oceanographic conditions in its straits, such as Lombok and Makassar, have been too noisy for fixed underwater sonar arrays to detect submarine movements. However, this situation could well change as developments in signal processing make fixed arrays more effective.

Even if we wanted to deploy submarines to East Asia in 25 years’ time, we may not be able to do so with assured secrecy. If this were the case, then a smaller European submarine could well meet Australia’s requirements with a saving of billions of dollars to the Defense budget.

Sam Bateman is a professorial research fellow at the Australian National Centre for Ocean Resources and Security (ANCORS), University of Wollongong, and also an adviser to the Maritime Security Programme at the S. Rajaratnam School of International Studies (RSIS), Nanyang Technological University, Singapore.