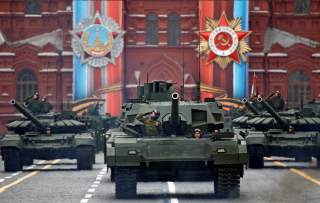 In addition to a warship-sized array of weapons, the 8,500-ton Ivan Papanin–class vessels will mount powerful lasers that can cut through ice—and possibly through enemies as well. They will join a fleet of forty existing Russian icebreakers. The United States is now down to two, even as the United States, Canada and other nations are focusing on the Arctic, where melting ice offer the lure of fresh mineral deposits and new commercial shipping routes.

The first of these icebreakers was laid down in April, according to Russian news site Sputnik News. “The multipurpose vessel is conceived as an all-in one Navy warship, icebreaker and tugboat,” measuring 361 feet long, and with a speed of sixteen knots and a range of six thousand nautical miles.

The Ivan Papanin–class ships, also known as Project 23550, will be fitted with a “modular armament suite,” Russian defense-industry sources told Jane’s 360 in April. Sputnik News cites a Russian analyst who claims that “in addition to radio-electronic equipment and its heavy-duty hull, Project 23550 icebreakers will include the ability to deploy missile weapons…The Kalibr-NK [cruise missile] system’s launch containers can be placed comfortably on the ship behind the helicopter landing pad. A total of eight launchers can be deployed onboard.”

The same analyst also raises an intriguing possibility: an Ivan Papanin–class icebreaker could “rescue an intruder vessel that's been caught in the ice, and tow it” to another location. This suggests that these Russian icebreakers won’t necessarily sink vessels deemed to illegally be in Russian territory: if those ships are stuck in ice, the icebreakers will tow the hapless intruder back to a Russian port to stand trial.

And that’s where the lasers come in. “Later this year, scientists aboard the Dixon, a Russian diesel-powered icebreaker operating in the White Sea, will begin testing of a 30-kilowatt ship-based laser, designed specifically for easing the movement of ships operating in the Arctic environment,” Sputnik News said. “The project involves experts from the Moscow-based Astrofizika Design Institute, with the assistance of St. Petersburg's Arctic and Antarctic Research Institute.”

A Russian physicist told Russian media that the new laser is designed as an ice cutter rather than a weapon. “We’re talking about easing as much as possible navigation through northern regions. In addition, it’s necessary to test empirically calculations, create the system, measure energy consumption and calculate many other parameters. For the first stage this is enough.”

It’s the following stages that will be interesting. As the United States discovered during its attempt fifteen years ago to create the YAL-1, a giant chemically powered antimissile laser mounted on a 747, a powerful laser has a powerful appetite for energy. But that isn’t stopping Russia from trying to develop a two-hundred-kilowatt laser for its icebreakers (by comparison, the U.S. Army just took delivery of a truck-mounted antimissile laser with a power of just sixty kilowatts).

A laser powerful enough to cut through six feet of ice would probably prove equally formidable against missiles and drones, and perhaps even other ships. However, what’s really significant here isn’t the lasers. It’s the attention that Russia is paying to fighting in the Arctic, from icebreaker-warships to rugged antiaircraft missiles. That’s more than the United States is doing, and more than a small but Arctic-savvy nation like Canada can afford.

Russia has proven prescient at anticipating future warfare, from devising mechanized-warfare theory in the 1930s to unconventional hybrid warfare today. Does Moscow know something about the Arctic that America doesn’t?

Image: Moscow - Russia - 09/05/2017 - Russian servicemen parade with tanks during the 72nd anniversary of the end of World War II on the Red Square in Moscow. REUTERS/Maxim Shemetov