A Russian Expert Doubts The Army's 5.56-mm Round Replacement Plan 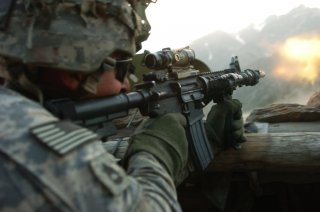 Here's What You Need to Remember: Some Russian experts believe Russian weapons need a bigger bullet. “The Army may give up using 5.45-mm  rounds due to the bullets’ insufficient effect to pierce the manpower’s individual protective gear at medium and increased fire ranges," said a Russia defense institute in early 2019. Its recommendation? Go back to an improved 7.62-mm round.

Will the U.S. Army follow through on a plan to adopt a bigger caliber of small arms ammunition?

One Russian expert says no.

Viktor Murakhovsky, editor-in-chief of Russian defense journal Arsenal of the Fatherland, questions the practicality of the U.S. Army’s project to replace the familiar 5.56-mm round—used by the M-16 and M-4 rifles—with a more powerful 6.8-mm round for the Army’s Next Generation Squad Weapons program. The new bullet is expected to have at least double the range of the smaller 5.56-mm round. But the move has raised fears among American observers that a higher-velocity bullet will generate unsustainable stress on a new assault rifle.

Murakhovsky doubts the new round will have a stable trajectory. "The ammunition’s destructive effect is not characterized only by its piercing capacity,” he told the TASS news agency. “The stopping power, the wound tract and the wound cavity are just the bullet’s immediate effects. But another aspect is to see how the bullet travels along its trajectory and how stable it is, including to atmospheric phenomena.”

It all rests on basic physical properties: the ammunition has reached its limit of what the ballistic gunpowder can propel and that’s it.

Murakhovsky also questioned the economics of switching from 5.56-mm to 6.8-mm. "This is the cost of the small arms industry’s switchover to this caliber and [the creation] of mobilization reserves. The number of rounds fired in a big war amounts to billions of cartridges a year. During the Cold War period, when the stake was on the victory of capitalism, all the NATO members switched over from the 7.62mm to the 5.56mm caliber. But what funds will they use now to switch over to the new caliber?"

Some 5.56-mm rounds can already penetrate Russian and Chinese body armor. "A round exists for the 5.56-mm caliber, which ‘pierces’ any armor vests at a distance of half a kilometer," Murakhovsky said. But the “cost is extremely high because its core is made of tungsten carbide" and, therefore, it cannot be mass produced, he added.

The Russian expert could not resist taking a dig at the U.S. Army’s long and fruitless effort to develop a replacement for the 1990s M-4, which itself is mostly based on the 1960s M-16 (which had a rocky start when first issued during the Vietnam War).

“I remember all these [American] next-generation programs from the time when I was a lieutenant,” Murakhovsky said. “And whatever they tried: the 4.7-mm caliber, caseless cartridges and rocket bullets. This story will last forever.”

But some Russian experts believe Russian weapons need a bigger bullet. “The Army may give up using 5.45-mm  rounds due to the bullets’ insufficient effect to pierce the manpower’s individual protective gear at medium and increased fire ranges," said a Russia defense institute in early 2019. Its recommendation? Go back to an improved 7.62-mm round.

Michael Peck is a contributing writer for the National Interest. He can be found on Twitter and Facebook. This article first appeared earlier in 2019.