The ‘Trump Card’ Is Still Worth Something in Afghanistan 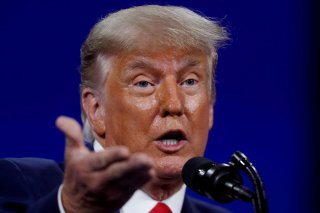 If President Joe Biden orders an end to U.S. military involvement in Afghanistan, America’s war hawks will do their utmost to make him responsible for whatever comes next. This makes exiting the Afghan War a risky proposition for the Administration. Nobody wants to be left holding the bag if and when intra-Afghan talks break down and cities such as Kandahar—perhaps even Kabul—fall to the Taliban.

To make a withdrawal from Afghanistan stick, the president would ideally move to secure bipartisan support for U.S. troops coming home. But bipartisanship is hard to find in today’s hyper-polarized political environment. The President will have to be creative in how he proceeds.

Biden’s best option might be to pursue bipartisanship without the help of Republicans on Capitol Hill.

Bipartisanship without the willing participation of one side might sound like an oxymoron. But this is what Biden’s team is already attempting when it comes to infrastructure—pointing to support among Republican voters as evidence of bipartisanship even as GOP lawmakers cry foul.

On the Afghan issue, Biden can exploit the fact that the most popular figure in the contemporary Republican Party—former President Donald Trump—just so happens to be an outspoken advocate of military withdrawal and the architect of the very withdrawal plan that Biden is now wrestling with how to implement.

If he is willing to share credit with his predecessor, Biden might be able to disarm GOP hawks who would otherwise delight in assailing a Democratic president for the crime of ending America’s longest war.

Of course, giving Trump credit for anything will be hard for Biden to swallow. But the only way to ensure that his anticipated exit from Afghanistan does not fall victim to domestic discord is to convince lawmakers from both parties that their own supporters are on board. For this message to land with Republicans, Biden could do far worse than to hold his nose and invoke Trump.

The case against a military withdrawal from Afghanistan has long been more political than it has been strategic. The past twenty years are proof positive that the Taliban and other extremist groups cannot be put out of commission. At best, they can be held in abeyance. America’s leaders know this.

What successive U.S. presidents have wanted to avoid more than anything—first former President Barack Obama, then Trump, now Biden—is the political embarrassment of having “lost” Afghanistan. This is why both Obama and Trump authorized surges of troops despite nominally wanting to end the war. And it explains why, according to news reports, Biden’s team is having some success at persuading him against a speedy exit.

It is understandable that U.S. leaders have been reluctant to bite the bullet of a complete military withdrawal. More than twenty-three hundred Americans have died in the Afghan War. It is painful to acknowledge that their deaths were not enough to put Afghanistan on the pathway to political stability.

But even if the United States cannot save Afghanistan from the horrors of civil war and authoritarianism, it should be possible for Americans to stop punishing one another for what happens overseas. This is what Biden ought to focus on: changing the domestic conversation over national security such that military restraint is no longer viewed as a cardinal sin.

The militarist majority inside the GOP is an obstacle to this long-term goal. After all, Republican lawmakers voted against exiting Afghanistan even when their own man occupied the White House. By rights, their opposition to withdrawal should be even stronger now that Biden is in charge.

This is where the “Trump card” comes in.

When Trump occupied the White House, more than 80 percent of his supporters were in favor of withdrawing troops from Afghanistan. Biden should do everything in his power to remind GOP lawmakers that this is the electorate to which they are answerable.

As became clear during and after Trump’s second impeachment trial, Republican officials crossed the former president at their own political peril. For the most part, this dynamic worsened the problems of hyper-partisanship and polarization. But there is an opportunity for Biden to exploit the disconnect between the GOP establishment and Trump-led grassroots over Afghanistan.

Not all Republicans will be swayed by the argument that they should be faithful to what Trump had set in motion while in office. But at the very least, it will be harder for Republicans to oppose Biden’s exit strategy if it is cast as something that bears the signature of Trump—still the most powerful figure in the GOP.

For too long, America’s politicians have been paralyzed by the fear of appearing “soft” on national security. They have found refuge in the policy of never-ending war. This is a perverse outcome. Pro-war positions should be costly to hold. Peace and non-intervention should be the default.

If he acts with foresight, then Biden might be able to use the occasion of ending the Afghan War as an opportunity to begin the slow restructuring of how America’s two governing parties compete over the issues of defense and national security. This is a goal worth fighting for—a political climate in which neither Republicans nor Democrats want to be known as the War Party.