“The Dissident”: A Real-Life Thriller About the Khashoggi Murder 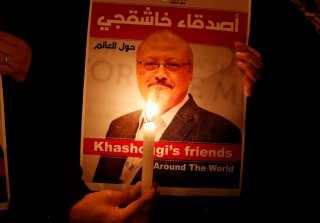 On October 2, 2018, Washington Post reporter Jamal Khashoggi was murdered at the Saudi consulate in Istanbul, Turkey. Released late last year, “The Dissident”, a documentary by Bryan Fogel, chronicles the murder of Khashoggi and gives a powerful voice to those dedicated to carrying on his work and life story, including his fiancé, Hatice Cengiz, and fellow activist, Omar Abdulaziz.

Fogel shares the story of what he calls, “sadly, a real-life thriller,” on the latest episode of Press the Button. Khashoggi, who fled Saudi Arabia for the United States in 2017 in fear of being targeted for his opposition to the Saudi Royal Family, visited the Saudi consulate in Turkey in hopes of obtaining necessary documents for his upcoming marriage. He was never seen again. Despite the evidence at the time of the murder, and incredible international attention, the Trump Administration denied involvement by the Saudi Government. Many hoped that the inauguration of President Biden would introduce a more substantial punishment of the perpetrators. In fact, Biden himself said he would take such steps in a campaign promise.

Unfortunately, as Fogel states in the interview, “many in the human rights community, among others, were disappointed by Biden’s actions to release the intelligence findings in the Khashoggi murder and then essentially take no action.” The intelligence findings, released in February 2021, state that Saudi Arabia’s Crown Prince Muhammad bin Salman approved the operation targeting Khashoggi. Releasing this report without any plan of action “sends a message, very sadly, that these kinds of actions by authoritarian leaders, that have the wherewithal and the financial backing and the power to carry out murder such as this, will be tolerated” Fogel explains. He relates this to similar crimes being committed by other authoritarian leaders including the recent poisoning and imprisonment of Russian opposition leader Alexei Navalny by the Russian Government.

When asked why he thinks there has been no direct punishment from the U.S., Fogel clearly points out that it is not just the U.S., but “the collective G20 action, as well as… big global corporate companies and banks and hedge funds and venture capital funds – that have all continued to do business with the kingdom” as usual. The U.S., however, is the largest supplier of arms to Saudi Arabia, a relationship that provides unique leverage that has thus far not been utilized by the U.S. for any real punishment. Fogel concludes that all these actions combined send “the message that these sorts of crimes will remain unpunished so long as there is enough money and investment to make it go away.”

But why would a government go to such lengths to prevent freedom of speech? Fogel dates this fear of freedom of press and freedom of speech back to the “power of social media [during the Arab Spring].” He believes that “what we learned from this is [that the Saudi] regime…is seeking to control power and free speech and control what is written about them at all costs,” for fear of similar civil uprisings.

“The Dissident”, however, shows that the power of social media is a double-edged sword. On the one hand, it is evident that social media permits a sense of anonymity – and with it, security – among journalists and activists as they work to expose human rights issues. On the other hand, the documentary illustrates how bots targeted both Khashoggi and his colleague and fellow journalist Omar Abdulaziz. In Khashoggi’s case, the efforts to silence him on social media climaxed in his planned assassination. In Abdulaziz’s case, Fogel shares that while he is now in Canada, “there are over 100 of his friends that remain in prison. In the film it’s 23 and his 2 brothers…[but] over the last couple years they have arrested several others that were in any communication with Omar.” Thus, these platforms that enable freedom of speech are the same that enable the ongoing tracking and blackmailing of these activists. The constant fear that Abdulaziz lives in is tangible in the documentary, as is the tragedy of the loss of Khashoggi, largely felt through the interviews with his fiancé.

Fogel expresses his frustration that despite efforts like his to increase the emotional response to such events, and in turn facilitate much-needed conversations, “the allure of selling hundreds of billions of dollars in weapons… makes it very difficult to have any sort of meaningful punishment.” At the end of the day, the documentary shows that the true cost of such a brutal murder is not felt by the Saudi Government, but is felt by those that loved him, and the community that relied on his truth-telling and journalism.

The entire interview with Byan Fogel is available here on Press the Button. To view the documentary, follow this link.