4 Big Revelations from the Kim-Moon Summit 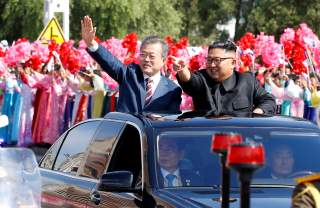 The third inter-Korea summit was held in Pyongyang on September 18. North Korean leader Kim Jong-un and South Korean president Moon Jae-in started it off by hugging in Pyongyang Sunan International Airport. Afterward, Moon was applauded by Pyongyang citizens as he and Kim drove through the capital. Then, the two leaders had a conversation and declared the results of their talks. The main contents of the summit are four things.

First, Kim Jong-un promised to visit Seoul this year. Second, Kim Jong-un declared that North Korea would destroy the Dongchang-ri missile engine facility under the watch of relevant countries’ nuclear expert inspectors. Furthermore, Kim Jong-un added North Korea would destroy the Yongbyon nuclear facility too when America does follow-up measures. Third, North Korea and South Korea won’t apply any military pressure to each other and have declared demilitarized areas in sky, sea and land. Fourth, North Korea and South Korea will go to the Tokyo Olympics as one team, and both Koreas will try to hold the 2032 Olympics in Pyongyang and Seoul.

The new Pyongyang Declaration is a really big deal to South Korea and North Korea. Two sections of the declaration especially matter, one bad and one good.

Second is the fact that North Korea may not have provided any list of current nuclear facilities and number of bombs. Kim Jong-un said that North Korea would dismantle the Dongchang-ri missile engine test facility. This concession is a big deal to the United States because the facility made North Korea’s intercontinental ballistic missiles (ICBMs). Kim’s ICBM ability is almost 90 percent to complete. Destroying Dongchang-ri means that Kim will abandon future nuclear ICBM abilities and limit the number of such weapons at his disposal. In other words, North Korea will not threaten America as much without more ICBMs. But giving them up doesn’t mean Kim will abandon North Korea’s nuclear weapons which are already made.

The Pyongyang Declaration has more good points than bad points. First, Kim himself said he would go to Seoul even though all his staff opposite him doing so. The visiting means that Kim has the will to force sincere denuclearization and settle the regular meeting of inter-Korea summits. South Korea is entirely different from North Korea, and many South Koreans oppose the meeting with Kim. This means Kim Jong-un will have to confront this awkward situation. Despite these political risks, his reason for visiting Seoul implies that he has prioritized economic development of North Korea above other things.

Second, Kim accepted inspections from related countries, and he declared that he would dismantle Yongbyon nuclear facility after the U.S. following with its own measures. This is important because the Yongbyon facility has a very symbolic meaning to North Korean nuclear development history. The facility can reprocess the plutonium and make HEU (High Enriched Uranium). So, while the United States thought that North Korea would abandon the facility at the end of negotiations, Kim appears to be abandoning the Yongbyon facility in the initial stage of negotiations. This is a big deal to North Korea, but there is one condition so-called the “following measure.” That means a declaration of the end of the Korean War. So, North Korea is trying to elicit a peace declaration from the United States by providing a substantial guarantee to America.

Fourth, South Korea’s President Moon has further information and another agreement with North Korea, which were not written into the September 19 Pyongyang agreement. It is likely to be North Korea’s denuclearization timetable and nuclear weapon list. This is what Chung was probably referring to when he said that President Moon and Kim had talked about another topic and came to an agreement besides the public one. In fact, Moon will visit the United States to share the information with Trump. If the information is a denuclearization timetable or the nuclear list which America is asking for, then there is likely to be a declaration of the end of the Korean war at the next summit between the United States and North Korea.

Sungku Jang is an Asan fellow at the National Interest.