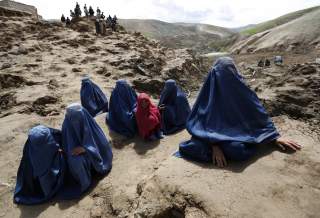 The recent article by Cheryl Benard, “Afghan women are in charge of their own fate,” presents a view that is not only distorted and patronizing towards Afghan women, but is also contrary to American interests.

It is ironic that Benard chastises us not to fight for our rights “via op-ed in the pages of the Western press.” However, as this is the venue she has chosen, we would like to take the opportunity to disavow her and your readers of some misconceptions about Afghan women’s role in the peace process.

I strongly agree with Benard’s assertion that Afghan women should be in charge of their own fate and should earn their rights through their own struggle. However, the picture that she puts forward of Afghan women waiting for their rights to be bestowed from the outside is irreconcilable with the reality here on the ground.

While we Afghan women appreciate the support that has been provided by American institutions and others since the beginning of the war, we have been fighting for our rights long before the American military arrived and will continue long after it has withdrawn. We kept struggling and educating our young ones in underground schools before America came to help us, and we kept our struggle going when American money went to empower warlords who were more interested in personal enrichment than advancing peace.

Benard highlights the time, resources, and lives that America has sacrificed in the interest of rebuilding Afghanistan. We have also sacrificed greatly, for a war we didn’t ask for. In fact, as a young women’s rights activist, eighteen years ago my organization asked to stop the bombing of Afghanistan and resolve the Afghan issue in a peaceful way. If we had done so then, perhaps today we both would not be counting the deaths of two-thousand-five-hundred American soldiers since the war began or of an estimated fifty-seven Afghan soldiers and policemen every single day. We also could have spared the lives of countless thousands of Afghan women and children who have been killed in night raids or have been bombed in Taliban attacks on public buildings and roadsides.

We are not seeking to blame the United States for the current situation Afghanistan finds itself in. Nor are we asking the American military to stay indefinitely. What we are asking for is a responsible withdrawal that is not at the expense of women’s rights and which respects the time, energy and lives that both men and women have sacrificed in the name of peace.

Research has shown that there is a 35 percent increase in the probability of a peace agreement lasting at least fifteen years when women are involved. The positive role that women play in peacebuilding has also been recognized globally through United Nations Security Council Resolution 1325 and through the United States’ own Women Peace and Security Act. It would be foolish to ignore this now, at such a crucial moment, by excluding Afghan women from the peace negotiations.

Those of us who have been involved in the peace process for many years—through advances and setbacks—have found our strength through work in our country and our communities. Both the war and our experience working with superpowers like the United States have taught us that no other people can be as resilient as we are.

We are not begging for our seat at the table. We are fighting for it. All we are asking is for those who call themselves our allies not to actively work against us.

Palwasha Hassan is the executive director of the Afghan Women’s Educational Center.