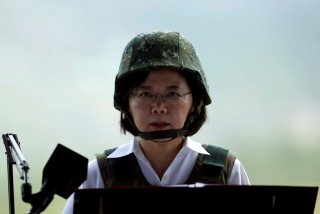 Over the last two years, many foreign policy experts asked if Kabul would resemble the chaos of Saigon in 1975. It seems such questions about a war that cost thousands of American lives were fully warranted—and applying the lessons learned from both Vietnam and Afghanistan could prove fruitful when considering the possibility of the United States intervening militarily to defend Taiwan from China.

At its root, the causes of failure in both Vietnam and in Afghanistan have been essentially the same: the United States became embroiled in a civil war and ended up on the wrong side of nationalism, a force that proved impossible to tame, despite all the high technology of the U.S. military. The Taliban and the Vietcong had completely different ideologies, diametrically opposite in some respects, but their common plank was the desire to drive the foreign interlopers away.

Now, U.S. strategists are regrettably contemplating deepening U.S. involvement, already extensive, in yet another civil war. The Wall Street Journal revealed on October 7 that U.S. troops have been secretly in Taiwan for over a year.  Chinese aircraft have been making larger and larger aerial displays around the island.  For example, fifty-six People's Liberation Army aircraft, including bombers and attack jets, were detected in Taiwan’s air defense identification zone (ADIZ) on October 4. Unquestionably, rising Chinese nationalism is partly to blame for this volatile situation.

However, Americans are not blameless in this situation and the current round of grave tensions really goes back to former President Donald Trump’s foolish decision to take a phone call immediately after his 2016 election from Taiwan’s leader, Tsai Ing-wen, in brazen defiance of the “one-China policy” that has been the foundation of U.S.-China relations since 1972. Other measures, such as sending senior-level officials to the island, increasing arms sales, completing a $255 million “mammoth new complex” in Taipei in 2018 that resembles an embassy, and parading warships through the Taiwan Strait, have been duly noted in Beijing.

Nationalism with Chinese characteristics is a driving force in current circumstances, but can this situation really be described as a civil war?  It’s a reasonable question given that Europeans and Americans alike have now started referring to Taiwan as a “country.” Putting aside the fact that the official name of the island of Taiwan, enshrined in its constitution and even on its passports, is actually the Republic of China and notably not the “Republic of Taiwan,” one may survey numerous other indicators of “nationhood.” For example, the National Palace Museum (NPM) in Taipei houses “a permanent collection of nearly 700,000 pieces of ancient Chinese imperial artifacts and artworks.” As the museum’s own website admits: “A review of the NPM's history shows that it has inherited China's national culture spanning thousands of years...”

Many American sinologists have studied the Chinese language in Taiwan.  There is actually a “Taiwanese” language distinct from Mandarin.  Notably, minnanhua, translates to “language of those south of the Min River.” Yet the Min River is not located in Taiwan, but rather runs through the capital of China’s Fujian Province—just across the Taiwan Strait. True, Taiwan does have a non-Chinese indigenous population, but they comprise just under two percent of the island’s population. In one of the most complete surveys of the island’s early history, Professor Tonio Andrade relates how five to six thousand Chinese farmers living in Taiwan rose up against their Dutch imperial overlords in 1652, shouting “Kill the Dutch dogs!” Indeed, Chinese people have been living on the island of Taiwan for a long time and when the Qing Dynasty invaded the island in 1683, defeating remnants of the Chinese Ming Dynasty, Taiwan was formally incorporated into China proper—almost a century prior to the American Revolution.

But does this history and culture really matter and what does it have to do with America’s debacle in Afghanistan?  After all, Taiwan is a wealthy, long-time partner of the United States with impressive democratic credentials and is located in a geopolitically sensitive spot—the proverbial “cork” in China’s bottle.  Taiwan’s many friends in Washington have been at pains to point out that Taiwan is nothing like Afghanistan, contrary to abrasive Chinese assertions.

Regrettably, the comparison does actually have merit.  As in the Afghanistan War, a military conflict over Taiwan would represent a thoroughly unwinnable military scenario entailing significant and even catastrophic U.S. combat losses due largely to the brutal facts of geography.  Just as our commitment to our friends in Kabul was always rather dubious, most Americans could not find Taiwan on a map. Washington abrogated its defense treaty with Taiwan in 1979 as a condition of having diplomatic relations with Beijing. Corruption plagued the U.S.-supported regime and its armed forces in Kabul, moreover, and rather similarly the Taiwan leadership also evinces a shocking lack of commitment to its own defense, and the Taiwan armed forces seem, perhaps as a result, to be rife with mismanagement and incompetence.

Yet the most decisive factor will again be nationalism. Beijing has indicated that it is willing to bear any burden to reunify the nation. That determination sounds quite familiar from the American experiences in fighting both the Vietcong and also the Taliban. And so do the rather flimsy rationales for U.S. intervention, such as “preserving U.S. credibility” or safeguarding the “rules-based order.” Blundering into yet another civil war, but this time against a nuclear-armed and thoroughly prepared opponent would, unfortunately, result in consequences far more devastating for the United States than these other disastrous conflicts.