Afghanistan's Peace Process Remains Precarious Despite the Signing of the U.S.-Taliban Deal 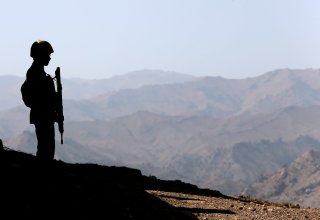 Violence and brutality are nothing new in Afghanistan. But the attacks perpetrated on May 12 were especially heinous, even by the standard of this war-scarred country.

The first, an ambush against a maternity ward in a Kabul-based hospital, left twenty-four people dead—many of them were new mothers. The second occurred over one hundred miles away in the Eastern Afghan province of Nangarhar, where an Islamic State suicide bomber detonated his explosives at a funeral. The two attacks shocked Afghans, convinced Afghan President Ashraf Ghani to resume offensive operations, and led his national security adviser to question whether peace talks with the Taliban were worth the effort.

The two attacks, however, also confirm what a majority of Americans already believe: the costs of continuing a U.S. military presence in Afghanistan heavily outweigh the benefits. Thousands of U.S. troops are essentially stuck in the middle of a civil war they neither have the capacity or responsibility to solve.

Afghanistan’s security situation has remained precarious despite the signing of the U.S.-Taliban agreement on February 29. The accord was designed to limit violence in the country’s major population centers, facilitate the mutual release of prisoners, and prepare the Afghan government and the Taliban for long and acrimonious discussions about Afghanistan’s political future.

Unfortunately for the Afghan people, peace talks that were supposed to start on March 10 have been nonexistent. While the Taliban have significantly reduced the number of attacks on U.S. and coalition troops, the movement’s operations against the Afghan national security forces are the uptick. Prisoner exchanges between Kabul and the Taliban have been held up repeatedly over disagreements on the identity of the detainees and the scope and timing of their release. It took three months before key voices in the Afghan government were able to strike a power-sharing agreement to resolve complaints about a disputed presidential election marred by fraud. That agreement includes a provision that elevates a notorious Afghan war criminal to the rank of marshal, confirming yet again how dysfunctional the Afghan system remains.

Through it all, approximately ten thousand U.S. troops remain on the ground waiting to come home. While the U.S. troop drawdown to eighty-six hundred is proceeding ahead of schedule, the future of those eighty-six hundred American servicemembers is in limbo. The fact is that while a 73 percent supermajority of veterans would support a complete withdrawal of U.S. troops from Afghanistan, Washington has yet to make the right call.

First, U.S. military involvement in Afghanistan has long lost its purpose. The original mission—decimating Osama bin Laden’s Al Qaeda network and punishing the Taliban for harboring the group—was accomplished in the first few months of the military campaign. By the winter of 2002, Al Qaeda’s terrorist infrastructure on Afghan soil was wiped out and the Taliban were begging to reconcile. Instead of declaring victory and coming home, Washington decided to transform the mission entirely to building, supporting, and nurturing a western-style democracy in Central Asia—the very definition of an unattainable objective. Nineteen years later, at the cost o over twenty-four hundred U.S. military fatalities and $2 trillion in taxpayer money, the United States continues to pay for that tragic mistake.

Second, no amount of U.S. military firepower can solve Afghanistan’s internal problems. The war between the Afghan government and the Taliban is fundamentally a contest for power, fueled by a myriad list of social grievances with complex tribal, ethnic, and historical dimensions. Afghanistan has been a country in conflict with itself—at times aided and abetted by its neighbors—for over forty years. The war will not stop until and unless Afghans of all stripes sit down together and go through the painstaking but necessary work of conflict resolution. To assume that an enlisted U.S. soldier from Kansas City, Missouri, or New Haven, Connecticut, can mediate disputes in Musa Qala or Kunduz is to set our soldiers up for failure at significant physical risk.

Frankly put, the U.S. military and the U.S. taxpayer is not responsible for the long-term security, prosperity, and survival of the Afghan government.

Last but not least, Washington simply doesn’t need thousands of U.S. troops in Afghanistan to defend the United States from anti-American terrorist groups. The United States spends approximately $60–$70 billion on its intelligence budget every year, more than what most countries spend on their entire militaries. Its capability to track, pinpoint, and target terrorists who threaten the homeland has been well documented (just ask ISIS leader Abu Bakr al-Baghdadi, who was killed in a U.S. special operations raid last fall). The U.S. intelligence community has also made tremendous improvements since 9/11 in acquiring and distributing the information necessary to keep tabs on transnational terrorist groups. The interagency is now incentivized and indeed expected to collaborate. Ultimately, coordination at the national, state, and local levels, well-prepared police departments across the country, and improvements to the nation's transportation security—not endless, expensive wars abroad—are far more impactful counterterrorism tactics.

Afghanistan is a country at war. Unfortunately, it’s likely to remain so until the major Afghan stakeholders come to the conclusion that it’s more advantageous to solve their disputes at the negotiating table than fight for them on the battlefield.

The men and women of the U.S. armed forces have done all they can in Afghanistan. It’s past time to bring them home.