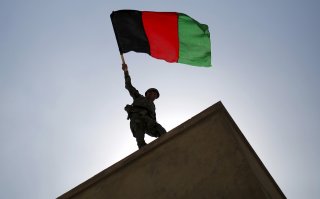 In a recent press conference, Pentagon officials signaled hesitation on the part of the United States to adhere to last year’s peace deal with the Taliban, blaming the group for Afghanistan’s recent streak of violence and saying such actions jeopardized the planned U.S. troop withdrawal. At the bottom, this signals a continued belief in Washington that Afghanistan’s internal state of affairs can justify a U.S. troop presence.

Given the failure of the U.S. war effort, however, this belief deserves closer scrutiny. Should Americans choose how other nations are governed?

For much of the foreign policy community in Washington, the answer is obviously yes. But, upon closer inspection, this “nation-building” argument fails to hold water. It follows that President Joe Biden should stay the course with the peace deal and meet the May 1 deadline of withdrawing all U.S. troops from Afghanistan.

The main reason the U.S. invaded and occupied Afghanistan after the 9/11 attacks was to punish the Taliban for hosting Al Qaeda and deny the international terrorist group a safe haven. Just last summer, the Pentagon reiterated that “The vital U.S. interest in Afghanistan is to prevent it from serving as a safe haven for terrorists to launch attacks against the U.S. homeland, U.S. interests, or U.S. allies.”

This is only half of the argument for staying in Afghanistan, however. That the Taliban may harbor terrorists like the ones behind 9/11 is what motivates the United States to want a say in Afghanistan’s political future; that the United States thinks it can have a say is what keeps U.S. troops in Kabul. Since safe havens are outgrowths of weak governance, the thinking goes, states like the United States should cut to the root of the problem and build better governance in weak, violent states. This is how the initial U.S. invasion to decimate Al Qaeda leadership and punish the Taliban for accommodating them metastasized into an effort to “nation-build” in Afghanistan.

But the United States, powerful as it is, cannot nation-build in Afghanistan at an acceptable cost. Internal factors are far more important than external ones in determining whether nations become wealthy and stable or poor and fragmented, like Afghanistan. This is because nations take time to form. Afghans—who only gained independence from the British a century ago—are still in a contest for the character of their nation, for which the existing government and the Taliban have very different designs. Both of these groups have infinitely more at stake in the outcome than any American does. And the compelling interest in preventing a great-power war that drove the U.S. to implement expensive occupations in Germany and Japan after World War II is notably absent in Afghanistan’s case. No wonder even the United States cannot bring itself to commit the resources required to militarily defeat the Taliban.

All this is to say that if Afghanistan is to be “built” as a nation, then it must be by Afghans.

The tragedy of the current civil war in Afghanistan does not make this less true. Even though calls to remain involved in Afghanistan are often wrapped up in human-rights considerations, one can find reasons within the liberal tradition for America to leave. As notable liberal thinker, John Stuart Mill said, “A government which needs foreign support to enforce obedience from its own citizens, is one which ought not to exist.” It is a small wonder that Afghanistan is not at peace: The government in Kabul for which Americans have fought and died can barely survive —let alone govern—even with extensive American support. We as Americans may be a bit embarrassed that a government molded by us has not compelled every Afghan to enthusiastically fight on its behalf. But, fortunately for us, the only people that have an absolutely vital interest in solving that problem are Afghans themselves.

Americans have too long believed they can decide Afghanistan’s political fate. The 9/11 attacks and Afghanistan’s perpetual war have caused much human suffering, but neither justifies U.S. military involvement or nation-building efforts in 2021. That the nation-building rationale for remaining in Afghanistan has survived this long is a testament not to its validity, but to the staying power of disproven ideas in Washington. It is high time to leave Afghanistan.

Ethan Kessler holds a degree in political science from the University of Michigan.