After the Baghdadi Raid, the Forever War Drags On 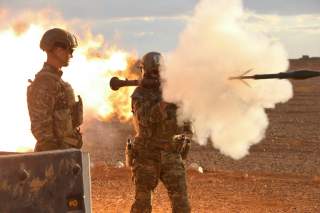 President Donald Trump claimed a major accomplishment in taking out Abu Bakr al-Baghdadi, the leader of the Islamic State. However, lost in the avalanche of media coverage, has been the fact that after years of blasting former President Barack Obama’s policies on Syria—which were, in fact, awful—Trump has doubled down on Obama’s worst policy missteps.

Since early 2018, Trump promised three times he would withdraw troops from Syria and end U.S. involvement on the ground. Three times he has failed to follow through.

Many of the president’s supporters were in a celebratory mood last weekend when Trump ordered the raid that took out Baghdadi. While the mission was a tactical success, it’s not likely to have any strategic benefit. That should surprise no one, as we’ve seen these types of operations fail to accomplish anything of lasting value for decades.

Each of these operations represented a tactical success, and yet none had any impact on Al Qaeda’s existence. In fact, after Zarqawi’s death, something worse arose: Baghdadi took control of AQI and reformed it into ISIS.

In all cases, killing a terror leader did nothing to dent their organizations because each merely replaces their leader with a new one and their operations continue without pause. It is crucial that the United States finally acknowledge an obvious truth: Ideologies cannot be defeated with military power. Trump appears not to have learned that lesson, even after watching Obama’s many failures in the Middle East.

Obama made the ill-advised “red line” statement in 2012 that he would never tolerate Syrian president Bashar al-Assad using chemical weapons in Syria. But in 2013, he decided not to follow through when it appeared Assad did use chemical weapons. Obama then deepened his mistakes the next year by approving a $500 million policy of arming and training “moderate rebels” in Syria and authorizing airstrikes for the first time.

In 2015, after assuring Americans he would not put boots on the ground in Syria, Obama sent “less than fifty” U.S. special operations troops into Syria to help build “local capacity” in groups fighting ISIS. One year later, he expanded the number of troops by another 250 to conduct a “counterterrorism” mission.

Then-candidate Trump blasted Obama for these moves, saying the president’s actions in Syria were a mistake and that if Trump had been in office, then he “would have stayed out of Syria.” Unfortunately, Trump not only failed to withdraw from Syria, but he also increased the number of troops to more than two thousand.

During his 2016 campaign, Trump had promised to “bomb the hell out of ISIS.” His goal of ridding Syria of the ISIS caliphate was accomplished in October 2017 with support from the Syrian Democratic Forces (SDF). At that point, Trump should have withdrawn U.S. troops and ended the deployment.  Early the following year, it appeared he would do just that.

In March 2018, Trump first announced “we are going to be coming out of [Syria] real soon. We are going to get back to our country, where we belong, where we want to be.” Nine months later, he seemed to strengthen his intent with a forceful video in which he declared, “We’ve beaten [ISIS] and we’ve beaten them badly . . . and now it’s time for our troops to come back home.” Despite these authoritative claims, Trump refused to follow through, and the troops remained.

When Trump made a deal in early October with Turkey to move the SDF away from the Turkish/Syrian border, he again issued firm promises to withdraw the troops from Syria. “It’s time for us to get out of these ridiculous Endless Wars,” Trump tweeted, and “bring our soldiers home.”

Before any meaningful troop movements could be conducted, however, Trump announced a caveat. “We’ve secured the oil,” he said last week, “and, therefore, a small number of U.S. troops will remain in the area where they have the oil.” I have conducted combat operations at isolated locations in both Iraq and Afghanistan, and I can assure you this will not be a minor operation.

More importantly, it is a military mission without an achievable objective. U.S. troops can absolutely seize and defend an oil field, but they will be on a mission with no end date. Aside from the absence of legal justification, holding oil facilities in a sovereign country will expose the United States to considerable strategic risk, provide no value to the United States, and will continue the “forever wars” the president says he opposes.

Trump was elected in part because of his opposition to the many failed wars his predecessors have waged. His rhetoric on ending these wars is right. But his words don’t match his actions. Staying in Syria is not a sign of strength and won’t improve our security. Trump needs to bring his actions in line with his words.