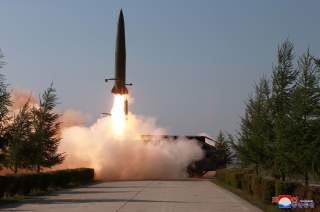 In a recent interview with Axios, former National Security Advisor H. R. McMaster warned it was difficult “to overstate the threat of a nuclear North Korea,” and added that Donald Trump must “prepare for at least the option of the use of military force.” A sober and comprehensive analysis, however, shows such military-first views are common among Washington’s establishment thinking—and represent a failing school of thought: what can only accurately be called “fearism.”

Fear may be the most powerful of all human emotions. It can help us avoid serious harm—or it can be used to manipulate. Since 9/11, fear has become the basis for most of our foreign policy—and our lives are worse because of it. Fear of a given opponent, like McMaster’s claim against North Korea, is used to justify a worldview that posits the only way to keep our country safe from any enemy—real or presumed—is to use or threat to use lethal military power.

There is little to no effort placed in considering the circumstances surrounding said opponent, its history, its culture, the surrounding geopolitics, nor the balance of power between it and the United States.  In many cases, if a state we don’t like possesses the ability to even attack our country, fearism argues America should consider using military force to eliminate it. Also lacking in this worldview is a consideration of the intent of the target country or their capacity to successfully take on America.

Up through the end of the Cold War, America’s guiding foreign-policy philosophy had been realism, which sees the world as it is: anarchical, competitive, and dominated by states. Realism didn’t raise undue alarms over various threats because it recognized the United States’ strengths compared to rivals and the ability of other states to manage problems by balancing against threatening states.

As a result of the trauma of 9/11, we have abandoned that concept and replaced it with one predicated on fearing all opponents. This “fearism” all too often produces policies that are irrational and illogical—and perversely dissipates, not strengthens, our national security.

We fear terrorism. We fear what the Russians might one day do; what the Chinese might do; we are afraid of Iran, North Korea, Cuba, Venezuela. But are those fears valid? Yes, some concern about each is valid—terrorism, for example, is a real threat from which we must defend ourselves—but the level of fear establishment thinkers offer is vastly overblown.

For eight years the Bush administration—and then Obama after him—intentionally sought to tie their global actions to an emotionally-charged issue they knew would elicit anxiety among the listeners—fear of “another 9/11!”—and quash any dissention. It worked. Anyone who dared question the overwhelming focus on counterterror operations was derided as weak on defense or worse. The only problem: the claims of those citing a major threat from terrorism were factually wrong.

The 2001 terror attacks barely had anything to do with the territory of Afghanistan and were mostly designed, as I recently chronicled in a Washington Times piece, “between the years 1993–98 while (mastermind Khalid Sheik Muhammed lived and traveled) in Sudan, Yemen, Malaysia, Brazil, India, Iran, Indonesia, Malaysia and Pakistan”—and the operational preparation took place mostly in the United States. To claim we have to stay at war in Afghanistan forever to prevent “a new 9/11” is flatly wrong and is supported solely owing to an irrational fear.

A careful, comprehensive, and unemotional analysis of the full range of America’s soft and hard power, combined with an equally accurate assessment of any given opponent, conclusively proves that there are vastly superior and cost-effective ways to keep our country safe and prosperous. The best remedy to the bankrupt concept of fearism is the elevation of a new approach: what I call “constructive realism.”

Unlike fearism, constructive realism isn’t looking for any opportunity to use force—rather, it seeks to keep our country safe by avoiding unnecessary conflict.

It elevates diplomacy above the military instrument to defuse problems before they become acute. And critically, considers a foe’s intent and capacity to harm our country in comparison with U.S. power, not just whether they have certain weapons. If a careful analysis reveals that a given state may be antagonistic towards us but have neither the intent nor military capacity to successfully attack us, constructive realism would rely on our powerful deterrent to keep us safe and not enter into unwarranted and ultimately futile military operations.

To be effective in the perpetually chaotic, complex world, constructive realism provides an effective framework to guide U.S. foreign policy to achieve appropriate strategic objectives at an affordable cost. America’s core interests are those necessary for the government to fulfill its most sacred duties: defend its people, secure the rights and liberties of individual citizens, and fosters conditions which maximizes our ability to prosper as a nation.

To defend these core interests, we should establish and maintain the following strategic objectives as a minimum: 1) provide for the common defense by maintaining a powerful, modern Armed Forces that can protect against attack from any opponent; 2) prioritize productive, constructive engagement in our relations with other global players, which means a greater emphasis on shrewd diplomacy to achieve win-win outcomes wherever possible; and 3) facilitate and maintain peace to the maximum extent possible.

To accomplish these objectives, senior leaders must conduct an unemotional assessment of the strengths and weaknesses of various foreign entities, ascertain whether they intend to be cooperative, antagonistic, or neutral towards the United States, and compare that with America’s economic, diplomatic, and military capabilities. Our leaders will then be able to select appropriate policies for individual actors to best accomplish each of our objectives. Here’s what that would look like in the real world.

Conventional, establishment Washington thinking holds that the greatest threats to U.S. national security today are Iran, North Korea, Russia, and China. The prevailing theory is that the only language these countries understand is brute force, and thus we routinely communicate our willingness to use lethal military action against any adversary to compel compliance to our policy preferences, regardless of this approach’s track record of failure.

What should be the most obvious is that neither individuals nor governments react positively to constant threats. If Washington constantly demonstrates its willingness to use force to get its way, the result too often is to harden an adversary’s resolve, not to realign their policies with U.S. interests, as diplomacy seeks to do. No one in the world doubts our ability and willingness to use lethal military force—the large number of our current and perpetual wars confirm this.

Recognizing America’s unparalleled geostrategic position—prosperous, dynamic economy; strongest military; robust nuclear deterrent; favorable geography and weak neighbors—the United States is free to change the nature of our engagement with key players in the world in ways that improve our national security and enhance our global economic prospects. Here are a few key examples:

North Korea: Kim Jong-un does not want to go to war with the United States. He has zero intention of ever using his arsenal in an offensive strike against either the United States or any of our allies. He does desire to formally end the Korean war, seek closer political and economic ties with South Korea, and to see his domestic economy expand. Trying to demand full denuclearization up front is guaranteed to fail. The best way to ensure our security is to facilitate reconciliation between South and North Korea, reduce tensions so no party feels threatened, and over time work towards disarmament.

Iran: Emotions aside, Iran does not represent a security threat to the United States that can’t be deterred with our normal nuclear and conventional military posture. They are a middling, regional power, but they are more than balanced by other Middle Eastern powers. Our European allies, Russia, and China are still parties, along with Iran, to the Joint Comprehensive Plan of Action (JCPOA) and would support either a mutually beneficial expanded agreement or revitalized diplomatic engagement from Washington. Bottom line: military force is the absolute worst way to check Iran’s influence and the most likely to fail.

Russia: Russia is not the Soviet Union. It doesn’t have a massive land army, powerful air force, or a large modern navy. It is the economic equivalent of Italy. They do not have the ability to project power into Western Europe and pose no direct conventional threat to America at all. They do, however, possess the ability to destroy us with nuclear weapons and thus it is in our interest to maintain productive relations with them. Our conventional and nuclear deterrent ensures we don’t need to fear an unprovoked attack.

China: Beijing is a rising economic and defensive military power. In addition to economic opportunity, it seeks elbow room in its own backyard and security from external attack. Its “A2/AD”—anti-access, area denial—military investments are expressly designed to defend the Chinese mainland from attack. They pose no offensive threat to its neighbors, let alone the United States. Like the United States, China shares an interest in avoiding war. We do hundreds of billions in trade with China each year, and with firm but fair diplomatic engagement, we have the potential to increase economic opportunity for American business.