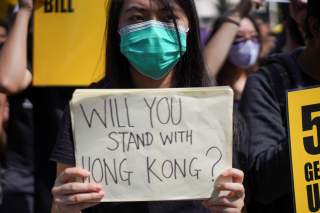 On July 4, 1821, then-Secretary of State John Quincy Adams answered critics who implied the United States wasn’t doing enough on the world stage. America, he said, “is the well-wisher to the freedom and independence of all,” but is “the champion and vindicator only of her own.” His words might appropriately apply to Hong Kong today.

The United States is the most powerful and longest-lasting democracy in the world today. Throughout our history, we have been the biggest advocates of democracy and freedom abroad—and occasionally, spilled our own blood to defend and preserve it for the benefit of others. We should unequivocally affirm the aspirations of those in Hong Kong who seek expanded freedoms. Where we must exercise wisdom and prudence, however, is in how forcefully and in what ways we support the freedom-seekers.

This past weekend was the eleventh consecutive week of protests and marked one of the largest demonstrations in the history of Hong Kong, as an estimated 1.7 million people marched. The flare-up began when the Hong Kong government considered passing a new law that would make it easier to extradite Hong Kong citizens to mainland China. Many feared it would increase Beijing’s coercive power over the island.

Hong Kong has been governed by the “one country, two systems” approach negotiated between Beijing and London in 1997 that paved the way for a return of sovereignty to China. Beijing sought to allay the fears of Hongkongers that the communist government would not destroy the relative freedoms Hong Kong residents enjoyed under 156 years of British rule.

Over the past several years, however, Chinese leaders have been slowly chipping away at those freedoms. These protests may have started over the extradition law, but it proved to be a spark that erupted into a flame, as Hong Kong residents vent their frustration at the loss of freedoms and fear they may lose more. The question for U.S. policymakers, however, is what, if anything, should the United States do?

On Sunday, President Donald Trump said he believed Chinese President Xi Jinping and the protest organizers would be able to work their differences out, but said, “I think it would be very hard to [reach a trade deal with China] if they do violence. If it’s another Tiananmen Square … I think it’s a very hard thing to do if there’s violence.” While it’s understandable Trump would communicate consequences to Beijing should they quash the protests, the dilemma in which this would place America illustrates why Adams’ 1821 advice remains valid and important today.

The United States and China remain locked in a trade war that is already hurting both sides, especially American farmers. The situation should be resolved as quickly and positively as possible to spare the American people economic hardship. Predicating a negotiated settlement on what China may or may not do in regards to the protesters in Hong Kong would place us in a position where our economic interests continue to suffer for the sake of another nation.

Beijing has incentives to resolve this dispute peacefully. Hong Kong is one of the world’s leading centers for business and represents a crucial bridge between China’s mainland economy and their connection with the rest of the world. The ongoing protests cause incalculable—and compounding—harm to Beijing’s domestic economy. If the protests turned into riots and Xi ordered a violent crackdown, Beijing would pay a heavy political and economic price, domestically and internationally.

However much some in America may wish to intervene in Hong Kong if things go south, the sober truth is that there aren’t many levers America could pull, let alone any that would be likely to improve the situation. There is already growing angst between Washington and Beijing owing to the trade war, our challenges to China’s claims of sovereignty over some islands in the South China Sea, and over the recent sale of F-16s and other offensive weapons to Taiwan. Our ability to positively influence Xi is therefore at a low ebb.

The best way to influence China—or any country—would be to act as an exemplar in demonstrating how modern, powerful nations deal with disputes in effective, free, and fair ways, and without resorting to violence. We wish all people to enjoy freedom and are right in advocating for it. But we can only fight for and guarantee the freedoms of our own people.