America Knows It Cannot Win in Afghanistan—So Why Keep Fighting? 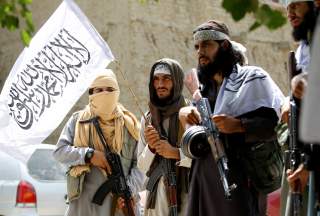 A recent survey found that 57 percent of Americans, including 69 percent of military veterans, said they would support a decision by the president to remove all troops from Afghanistan. But Washington’s foreign-policy elites—neoconservatives, defense hawks, and liberal interventionists alike—reject such a notion. According to Richard Hass, president of the Council on Foreign Relations, “Neither winning the war nor negotiating a lasting peace is a real option in Afghanistan. Just leaving, though, as we are about to do in Syria, would be a mistake.”

Incredulously, Haas admits that we are “spending on the order of $45 billion a year on a war that cannot be won,” but believes we should spend more. A report published last year by the Center for Strategic and International Studies concluded that Department of Defense (DoD) Overseas Contingency Operations (OCO) funding for the Afghan conflict from Fiscal Year (FY) 2001 to FY 2018 would be more than $840 billion. However, one estimate has the war costing more than $1 trillion to date and another estimates total war spending for Afghanistan at roughly $2 trillion when other war-related costs are included. With the U.S. national debt at $21 trillion and counting (almost a third of which is owned by foreign investors with China being the largest foreign holder), Washington can ill afford to continue wasting money on a war America can’t win—as well as risking American soldiers’ lives.

To begin, Haas is correct that the United States cannot win the war. FM3-24, the U.S. Army’s counterinsurgency manual states, “Twenty counterinsurgents per 1,000 residents is often considered the minimum troop density required for effective COIN [counterinsurgency] operations.” With a population of more than 33 million, that would require a force of 660,000 troops (more than the entire U.S. Army active duty force). If only those areas either under the control of or contested by insurgents need to be secured (where some 11.6 million Afghans live according to the most recent Special Inspector General for Afghanistan Reconstruction (SIGAR) quarterly report), the requirement is still a staggering 232,000 troops. Haas himself acknowledges, “It is hard to see how 14,000 or 7,000 American troops could accomplish what more than 100,000 could not.”

And when Haas says that negotiating a lasting peace is not a real option, what he really means is that negotiating a peace that leaves in place a friendly, democratic government—without Taliban influence—engineered and installed by America. But however desirable a representative, multiethnic, democratic government in Afghanistan would be, it is not an absolute necessity for U.S. national security. The overriding requirement is that whatever government controls Afghanistan—even if such a government is not a friendly government—understands that the United States will not tolerate support for or the harboring of any terrorist group with global reach that directly threatens the United States. The reality is that the Taliban is not a direct threat to U.S. national security and the Al Qaeda and ISIS terrorist threats in Afghanistan are not a direct, existential threat to the American homeland. So not only is Afghanistan a war America can’t win, but it is a war America doesn’t have to win.

Haas dubiously poses that “Afghanistan could again become a place where terrorists train recruits and plan attacks against U.S. interests around the world and against America itself.” But then acknowledges that “would be little different from other places where terrorists are able to operate unmolested.” It’s important to understand that the terrorist threat is about ideology, not territory. A terrorist plot can be hatched and conducted from anywhere in the world—and not necessarily from a country deemed hostile to America. The key operatives in the 9/11 terrorist attacks were part of the Hamburg cell in Germany. And fifteen of the nineteen hijackers were citizens of Saudi Arabia—a country “friendly” to the United States.

The refuge of last resort for Haas is that “an exit would cast further doubt on America’s willingness to sustain a leading role in the world” and “walking away would lead many allies—not just in the region, but also in Asia and Europe—to wonder if they might be the next American partner to be abandoned.” But America’s primary responsibility is to its national security. America’s commitment to allies is based on shared interests. Washington should not be risking American soldiers’ lives for the sake of its allies and their interests if those interests do not coincide with America’s. And it is not in U.S. interests to simply support American allies if U.S. national security is not at stake—which it isn’t in Afghanistan.

To do so becomes a prescription for endless occupation, which actually puts the United States at greater risk. A foreign occupier breeds resentment among the population, just as it would in America, making it easier to recruit insurgents and target the occupier. Moreover, it becomes part of the narrative for the radicalization of Muslims around the world and motivation for terrorism against the United States. It’s important to remember that Osama Bin Laden’s main reason for attacking America was the presence of the U.S. troops in Saudi Arabia.

One thing Haas has right is to encourage “Afghanistan’s six immediate neighbors (which include both China and Iran as well as Pakistan) and other actors, including Russia, India, and the EU, that have a stake in the country’s future” to take greater responsibility. After all, they have more skin in the game because they have more to lose. Furthermore, the best way to get those countries to take up the mantle of responsibility is for America to leave Afghanistan so that it’s clear that it is their responsibility.

Instead of agonizing over finding a way to remain in Afghanistan indefinitely with what is “not a strategy for winning,” Americans should be agonizing about why they are still there after more than seventeen years fighting a war that can’t be won.