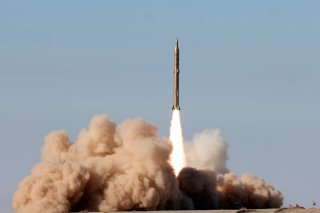 It has been over a year since candidate Joe Biden ran on a platform that emphasized diplomacy with key nuclear powers and called for a reassessment of the reliance on nuclear weapons in U.S. national security policy. However, a year in, Terrell Jermaine Starr says, “I have to ask, is Biden really serious about nuclear disarmament?”

Starr is the founder and host of the foreign policy podcast Black Diplomats, which is dedicated to discussing international politics and culture from the perspective of people of color. On the latest episode of Press the Button, Starr joins co-host Michelle Dover to discuss what truly makes a secure and safe world when it comes to nuclear weapons.

Starr first points to the lack of understanding in the U.S. media and policymaking on Iran. He notes, “Iran is talked about in mainstream media with little to virtually no context. We’re already dealing with a press corps that severely misunderstands how nuclear weapons work, doesn’t understand disarmament, and our media have picked Iran as the boogeyman.” Furthermore, he notes the media and policymakers inaccurately portray the reality of the current challenge regarding the Iran nuclear agreement. He highlights that we need to be more clear that it was the United States, under then-President Trump, that withdrew from the Joint Comprehensive Plan of Action (JCPOA) and that until the U.S. withdrawal, Iran was complying with the agreement. Starr also points out that Iran has “sworn that they don’t have an interest in…enriching uranium to the point where they can create a weapon,” consistent with its obligations under the Non-Proliferation Treaty.

With negotiations to return to the JCPOA set to resume at the end of November, Starr says he will be interested to see how it is covered by the media, and what the United States and Iran bring to the negotiation table. Starr’s own podcast, Black Diplomats, will feature Iranian experts in an upcoming series called “Iran in Context” in the hopes of increasing deeper education on the country.

The lack of context and understanding of nuclear weapons issues is not unique to Iran. Starr pivots to China to highlight another case in point. After China’s recent hypersonic missile test General Mark Milley said it was “very close” to a “Sputnik moment.” Starr calls the reference an “extreme exaggeration,” especially given the little information about the test. But more importantly, Starr points out that China has already had capabilities to strike the United States with a nuclear weapon and “this is just another piece of technology that most people are not going to get, but they’re going to overreact to.”

Stepping back to the bigger picture, Starr sees China playing the long game—building up weapons systems based on their expectation that Trump will be the Republican Party’s 2024 Presidential Nominee—rather than focusing on the current Biden administration’s posture. “Given that Trump has attacked our own democracy, I think that the concerns of Beijing are quite legitimate…I think they are worried about their own defenses,” he explains. The fact that Iran desires confirmation that the United States will not renege on the JCPOA also expresses their concern that another president, after Biden, might have another policy preference.

Starr fears this rhetoric in the media and among policy makers about the danger of enriching uranium, or new weapons developments, simply stokes a “ratcheting up the potential of an arms race.” One of the biggest challenges Starr notes—and hopes to address in his upcoming Black Diplomats series—is getting people to ponder: “why are people telling me that these violent weapons are going to make me secure when we have hundreds of thousands of people who are dying from COVID-19, and millions who are getting sick by it?”

So, where do we go, and how do we get a return to the JCPOA, a shift away from overblown Pentagon budgets and new missile tests, and avoid an arms race with China? Starr hopes that the Biden Administration will take bold steps towards disarmament as promised on the campaign trail. Unfortunately, thus far, he notes “the Biden administration has not signaled that they are ready to have a cultural shift” when it comes to the nuclear status quo.

To change this, Starr says the disarmament and nonproliferation communities “need to educate the American public about what safety and security is, and make this a coffee table conversation where we discuss how ridiculous and how useless this these weapons are, and how much of a burden they are on the taxpayer, and talk about the benefits of what it means to divest from nuclear weapons development and to invest in things like education, in climate change, [and] in food.”

Looking ahead, Starr says this movement “is going to have to be as grassroots as the Defund the Police movement.” This is the energy we need to redefine ‘safety’ and to get the message across that nuclear weapons do not make the world more secure.

The entire interview with Terrell Jermaine Starr is available here on Press the Button. You can learn more about Starr’s work on his website, and listen to Black Diplomats wherever you get your podcasts. Starr’s upcoming series ‘Iran in Context’ is funded by the Ploughshares Fund’s Mary Estrin award, which Starr was awarded earlier this year. You can also look for his upcoming book, Black Man on the Steppes: An Odyssey from Detroit to Eastern Europe.