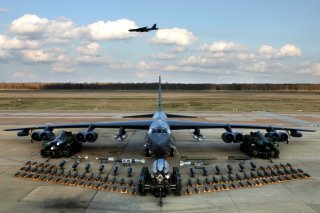 In the past few months, the Black Sea is a lot less quiet than it ought to be. A mostly land-locked sea with decades of treaties designed to keep interlopers from sending warships into the area willy-nilly, the source of tension is in the skies, with U.S. planes showing up just outside of Russian airspace. There have been times where such interceptions are reported twice or even thrice a week, usually with Russian Su-27 fight jets intercepting U.S. Navy surveillance planes that were moving to the outskirts of Russia’s airspace.

This culminated at the end of August, with an overflight by U.S. strategic bombers of the entire NATO alliance. Nominally a show of solidarity, it quickly became provocation when one of the bombers, a nuclear-capable B-52, made a beeline for the Black Sea, and headed for Russian airspace. An interception followed, and the usual U.S. complaining about how “unprofessional” that was. An incident with spy planes happened at the same time.

One might be forgiven for mistaking this for more of the same, but it is now being reported that the whole thing was deliberately a ploy by the United States, whereby they baited the Russians with a B-52, and then used the surveillance planes to collect data on Russia’s interception capabilities.

Officials were positively beaming about the success of it all. Even a casual look from the Russian perspective shows that this is wildly different from the other interceptions, and potentially much more dangerous. The difference is that this involves a nuclear-capable bomber.

The B-52 in question, with the call-sign NATO01, was built in 1961, at the height of the Cold War. This was exactly what nuclear attacks looked like in the minds of Russian defense officials back then, and then in the midst of all these interceptions of spy planes, a B-52 shows up near the home of the Black Sea Fleet. Russia could only conclude this was a major provocation, and the quick interception was the response.

U.S. Air Force claims of offense for the interception are particularly empty here, because not only was it an obvious reaction, the claims of having baited the Russians reveals they were counting on that reaction. Given the decades of tit-for-tat interceptions of strategic bombers between the United States and Russia, they couldn’t possibly have expected anything else.

If anything, the complaints of “unsafe” interception underscore the real problem, that this whole operation was entirely unsafe, deliberately provocative with nuclear assets, and risked the sort of civilization-ending misunderstanding that typified Cold War nightmares.

Surveillance intelligence on Su-27 and Su-30 planes, which have forty-three and twenty-one years in operation, respectively, should be only superficially illuminating for the Pentagon, given these are major Russian fighter jets that have no doubt been a focus throughout their active lives.

Decades ago, intelligence on brand new models may have been very important. There could have been a discussion, may back when, despite the huge risk of consequences that it was a risk to take. These days that no longer appears to be the case.

So why did it happen? Justifying a huge U.S. military budget year after year involves maintaining the appearance of imminent war with other major powers, especially Russia. That sometimes means being provocative, and for those buying into the narrative, it looks to justify risk-taking behavior. It is that mentality that has U.S. nuclear bombers speeding toward Russia sometimes.

Responsibility, not political expediency, should inform all such activity, and while it may seem counterintuitive to the military brass, the priority should always be avoiding provoking a worldwide nuclear conflagration. If they did so, there would be a lot less near-miss overflights around Russian territory, and a lot less concern about pilots dealing with unsafe interceptions.

In 2020, with ongoing efforts to save the nuclear arms limitation treaty process, the goal should be maintaining a sense of security that nations with retaliatory capabilities aren’t facing an imminent nuclear first-strike. That is an environment more conducive to talks, and that is an environment where bomber interceptions never have to happen.

Even the official purpose of these overflights, NATO solidarity, should be disposed of to avoid misunderstandings. Strategic bombers should not make anyone in NATO feel safer—a replacement for New START should make them feel safer. This is an important time for talks, and that should be the priority.

Jason Ditz is news editor at Antiwar.com, a nonprofit organization dedicated to the cause of non-interventionism. His work has appeared in Forbes, the Toronto Star, the Minneapolis Star-Tribune, the Providence Journal, the Daily Caller, the American Conservative, the Washington Times, and the Detroit Free Press.