Are the Walls Really Closing in on Trump? 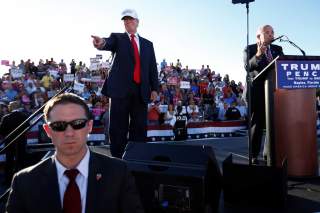 Are the walls closing on Donald Trump? The appearance of numerous witnesses, ranging from former White House aide and Russia hand Fiona Hill to State Department official George Kent, has convinced multiple Democrats that Trump isn’t simply on the defensive. Instead, he may be headed for the exit. For example, Sen. Chris Murphy (D-CT) declared, “The walls are closing in. The details we are learning about the shadow foreign policy operation Trump has been running to benefit himself personally are stunning. Why have a democracy, if we allow this to happen without consequence?”

Yesterday, Hill became the first White House official to testify before the House, ignoring an edict from the Trump administration that no one from the executive branch cooperate with Congress. Like previous testimonies, hers was behind-closed-doors, but it revealed how far back, and how expansive, the mission to investigate Hunter Biden was from the outset.

Attorney General William Barr has been conducting his own investigation (spearheaded by prosecutor John Durham) into the origins of the FBI surveillance of the 2016 Trump presidential campaign. This seems to be parallel, but separate, from the talks that President Donald Trump’s personal lawyer, Rudy Giuliani, was having with the Ukrainian government.

Then, two weeks ago, Secretary of State Mike Pompeo divulged that was in fact on the line during Trump’s call. And Giuliani himself revealed to the media that he was working in tandem with U.S. Special Representative for Ukraine Negotiations Kurt Volker (who resigned as soon as the Trump-Ukraine story broke) and current U.S. Ambassador to the European Union Gordon Sondland.

Now Hill, who served in her position from April 2017 until her departure in August, testified that a July 10 argument took place between Sondland and then-National Security Advisor John Bolton, who was fired in early September. According to Hill, Bolton told her to contact the National Security Council legal team and inform them about the conspiratorial actions of Giuliani, Sondland, and acting-White House Chief of Staff Mick Mulvaney.

“I am not part of whatever drug deal Sondland and Mulvaney are cooking up,” Hill recalled Bolton telling her.

Remembering an earlier conversation, Bolton apparently told her that “Giuliani’s a hand grenade who’s going to blow everybody up.”

If accurate, then this shows that Trump’s attempt to influence Ukraine was not a personal initiative but a controversial and widely known plan among his confidants, with Pompeo at least tacitly in favor, Bolton against, Barr out of the loop, and Giuliani and Sondland as the men on the ground.

When Hill confronted Sondland about the situation, he apparently informed her that he was in charge of the Ukraine portfolio, even though it doesn’t fall under his jurisdiction as EU ambassador. When asked on what authority, he told her that it was the president’s decision.

Since John Bolton left under unfriendly circumstances, Trump’s supporters and Bolton’s many opponents find his opposition suspicious. Trump apparently suspects that Bolton is the source of many of the Ukraine-related leaks in the past month.

“I always liked and respected John,” said Rudy Giuliani about the comments attributed to Bolton. “I’m very disappointed that his bitterness drives him to attack a friend falsely and in a very personal way. It’s really ironic that John Bolton is calling anyone else a hand grenade. When John is described by many as an atomic bomb.” The shock waves from the disputes within the Trump camp over Ukraine are continuing to send out shock waves in Washington.