Are We On the Verge of a War with Iran? 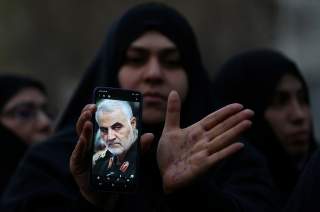 As the long-time commander of the Islamic Republic of Iran’s elite overseas military branch, Qassem Soleimani was on everyone’s radar.  His 20-plus years as the commander of the Islamic Revolutionary Guard-Quds Force earned the Iranian General a lot of enemies throughout the region.  In the short-term, his death in a U.S. drone strike on the outskirts of the Baghdad International Airport will be seen as justice served.

However, the main question is not whether Soleimani is responsible for carnage in the region (he is) or whether he has blood on his hands (he does), but whether Soleimani’s assassination increases or decreases the risk of a wider conflict between Washington and Tehran. Does this strike put American soldiers, diplomats, and citizens in the region at risk?

The answers are as obvious as the day is long. The strike on Soleimani is a gigantic leap forward on the escalation ladder, a move so dramatic that Iran will be forced to respond. And it will do so at a time and place of its choosing. The 60,000-70,000 U.S. military forces in the Middle East are now all potential targets of Iranian retaliation, the extent to which Washington can’t fully estimate. The State Department’s travel advisory urging all U.S. citizens to leave Iraq immediately is an indication that the Trump administration recognizes that Americans on Iraqi soil could very well be sitting ducks for some kind of violent response.

Is the White House prepared for what could come down the pike? Or is the administration now scrambling to contain the fallout of one of the most significant foreign policy decisions the president has taken in his tenure?

There is plenty we don’t know. For instance, we don’t know if Soleimani was a target of opportunity or whether the U.S. intelligence community was tracking his whereabouts days or weeks beforehand. All of this won’t be known until further information trickles in.

But what we do know is that prospects for a reduction in tensions between the United States and Tehran have exponentially diminished. The targeted killing of Iran’s most fearsome general is the culmination of a U.S. maximum pressure campaign against Tehran that has failed to accomplish anything its advocates so confidently predicted. Iran’s economy may be in the dumps, plagued by corruption, mismanagement, increasingly tight banking restrictions, and an 80 percent reduction in crude oil exports. But none of this economic pain has persuaded Supreme Leader Ayatollah Ali Khamenei to authorize a new round of negotiations with Washington, let alone cave to a set of unrealistic American demands that no Iranian official would even contemplate.

Instead, Iran has responded to maximum pressure with its own form of pressure. The Islamic Republic, schooled in the art of resistance, has proven willing to up the ante with asymmetrical measures that are difficult to combat or prevent. If Tehran was willing to respond to U.S. sanctions by sabotaging civilian tankers in Persian Gulf waters, launching cruise missiles at Saudi Arabia’s oil infrastructure, and methodically increasing its uranium enrichment capabilities, one can only imagine how Iran will choose to retaliate to a U.S. operation that took the life of its best military strategist.

The Trump administration still believes that maximum pressure is a winning strategy despite the poor results and escalation this strategy has produced. The reality, however, tells a different story: the more pressure (economic or otherwise) the U.S. places on Iran, the more Iran will resist and indeed act in ways that put Americans in the region in more danger. This was predictable before the White House pulled out of the nuclear deal, promising a “better deal” on Washington’s terms. At this point, any deal seems a far-flung fantasy.

President Trump continues to remind Americans that he was elected partly on a promise to extricate the U.S. military from the endless troubles in the Middle East. However, the killing of Soleimani opens the door to even more violence in the region while providing hawks in his administration with more power to dictate U.S. policy. The president risks blundering the United States into the very type of conflict he promised to avoid.

Washington and Tehran are now at the precipice of a serious confrontation. If the president refuses to back down from “maximum pressure,” the least he can do is remove our forces from the region where they sit with targets on their backs. Otherwise, another endless war may be around the corner.