Assad Is a Monster—And 'Winner' of the Syrian Civil War 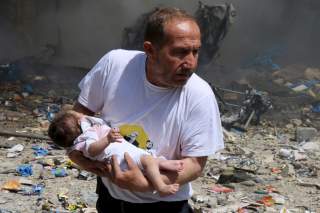 Bashar al-Assad is a war criminal, a schemer, a kleptocrat, an elitist ensconced in the bubble of Damascus, and an ego-maniac. It’s not a stretch of the imagination to envision a psychologist classifying the Syrian dictator as a sociopath after a single hour-long session. Assad is arguably one of the most loathsome human beings on the face of the earth.

And yet despite of all of these personality traits, Assad is also well on his way to a victory in Syria’s civil war—a nine-year-long cycle of indiscriminate violence that has turned a once proud and self-sustainable Arab nation into a playground for jihadist groups, foreign militias, and foreign powers. Assad, a man who many in Washington, Europe, and the Arab world predicted would be the next Muammar al-Qaddafi, has essentially vanquished his many enemies through attrition, some big help from his friends in Russia and Iran, sheer brutality, and clever machinations. As this piece is being written, Syrian and Russian warplanes are hammering Idlib province, the last remaining territory where an assortment of rebel groups (the most dominant being the Al-Qaeda linked Hayat Tahrir al-Sham) live alongside millions of desperate Syrian refugees. James Jeffrey, the U.S. special envoy for the Syrian conflict, told reporters last week that regime and Russian jets conducted 200 airstrikes over a span of three days in late January.

The question is no longer centered around whether the Assad regime will survive. For all intents and purposes, Assad was on course to win the war as soon as his forces recaptured the city of Aleppo in 2016 after years of fighting.  Assad’s victory was further cemented in April 2018, when hundreds of rebel fighters decided to get on busses traveling to the north rather than withstand additional chlorine and barrel bomb attacks.

No, the question now is whether Washington swallows its pride and admits cold-stone reality—Bashar al-Assad has not only won the war militarily but will stay in power until his dying days. Or, alternatively, whether the Trump administration still believes it can push the Syrian dictator out of Damascus.

At the present time, the Trump administration has taken the latter course. The signing of the Caesar Civilian Protection Act last December essentially guarantees U.S. sanctions on any firm, individual, or financial institution that seeks to support Syria’s post-conflict reconstruction. Washington’s strategy appears to be predicated on quarantining Syria’s eastern oil fields and scaring away potential investors from touching the Syrian market until Assad accepts at the negotiating table what he refused to accept on the battlefield: getting out of the way for free and fair elections. Because this simply isn’t going to happen, U.S. policy on Syria will remain one of diplomatic isolation and economic strangulation for the next few decades.

It’s hard to see how a permanent U.S. sanctions regime will make the Syrian people’s lives any easier to manage. The country has lost $226 billion in GDP between 2011-2016, no doubt most of which was caused by the regime’s war strategy.  UNICEF reports that two out of every five schools in Syria are damaged or destroyed and that half of the country’s health facilities are either underperforming or not functioning at all.  Syria was once able to meet 90% of its medicinal needs; now, Damascus has to import those items. Since imports are trickier, shop owners have to rely on the more expensive black market, which means they have to raise prices to make a profit. The Assad regime is hurting for cash and trying to salvage the situation through government-enforced fuel, food, and cooking oil rationing.

The majority of policymakers, lawmakers, and analysts in Washington don’t have a problem with keeping these sanctions measures on the books and even ratcheting them up. In general, sanctioning the bad guys is good politics. Who wouldn’t like to smother Assad’s finances and make his life a living hell?

The problem, of course, is that doing so also means that the Syrian population will suffer as well. Washington’s strategy is now entirely putative and attached to a fantasy policy objective. As Aron Lund of the Century Foundation told the Syria Direct website in early January, “Since 2011, the idea has been if we just pile on a little bit more pressure, then Assad will come to his senses and start democratizing or releasing prisoners, but so far, we have not seen any sort of change in the government’s behavior.”

The war in Syria is not yet over, but it has approached a point where the killing is at least winding down. The country’s future looks dim regardless.  Syria will be a place where low-level violence and foreign powers dictate events. Washington will have to figure out whether its interests are best met punishing the Syrian government (and by extension, the Syrian people) for crimes past and present or by becoming more discriminate in how it uses its sanctions authorities.