A Balanced Approach: Here's How America Should Be Involved in the Middle East 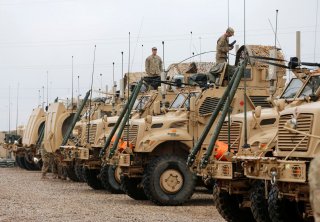 Editor's Note: This essay was a runner-up in the 2020 John Quincy Adams Society/The National Interest student foreign policy essay contest. You can read the other winners here.

As collective fatigue has set in over the “war on terror,” there has been a bipartisan reconsideration of America’s role not only in the Middle East, but in the world at large. While a reappraisal of what constitutes an American “national interest” is warranted, there is a natural tendency for overcorrection, as if making a 180-degree turn will rid our national conscience of past failures. Calls for absolute withdrawal from the Middle East are alluring on the surface, yet they fail to account for the benefits of U.S. presence or realize that we are increasingly able to do more with less. Conversely, those who argue for perennial boots on the ground, harboring beliefs that the region is predestined for interminable conflict, must understand that increased presence is not synonymous with stability, and vice versa. A sensible approach balances these competing ideas, carrying out retrenchment while reconciling the short-term demands of securing energy markets and buttressing regional security with a long-term objective of economic diversification and regional multilateralism that enables the United States to shift out of its first-responder role and towards being a defender of last resort.

Critics of U.S. presence in the Middle East sometimes point to increasing energy independence as a means of justifying an American exit. While claims of complete independence are imprecise, there is little doubt the United States has become far less reliant on the region’s oil. The shale boom of the last decade and the removal of an oil export ban in 2015 has drastically altered domestic oil production and the geopolitics of energy broadly, a far cry from the foreign oil addiction noted by President Bush in 2006.

This—in combination with a push towards renewables—has flipped predictions from “peak supply” to “peak demand,” whereby an abundance of energy sources persistently outstrips demand, keeping prices low. Moreover, this advantageous position has made it easier to curb Iranian ambitions. For example, energy prices were unexpectedly resilient after the September 2019 attacks on Saudi Aramco facilities and the intensified distress of multilateral sanctions due to diminishing oil revenue back in 2013 contributed to the election of President Hassan Rouhani, opening a path towards negotiation.

That said, oil markets operate on global prices, which means the United States is not entirely immune to supply shocks. Further, increasing shale-oil production takes significantly longer than traditional oil production, and any resulting increases in fuel prices portends political trouble in most countries. As demand for oil falls and renewable energy becomes increasingly scalable, many experts agree that the lowest-cost producers (predominantly in the Middle East) will be the last ones standing. This would once again increase the region’s market share and influence over industries that will be naturally slow to wean off oil for their energy needs. Therefore, for the imminent future the United States would be wise to not neglect a volatile region that still generates 30 percent of global oil production.

Second, preventing the resurgence of ISIS or any subsequent iteration necessitates U.S. attention. Yet this does not mean a large contingent of American troops are needed to sustain lowered levels of violence. Utilizing special operations forces and increasing burden-sharing is a sustainable strategy that will force allies to modernize their militaries and allow the United States to focus on higher priority goals like competition with China and Russia. Bilal Saab noted that multilateral cooperation in the Gulf has increased in recent years under the Combined Maritime Forces (CMF) and the Middle East Strategic Alliance (MESA), which includes not only Western countries but also direct stakeholders in the region like Egypt and Jordan.

This partial outsourcing of responsibility is a welcome development that should continue. In a multipolar era, it is unrealistic to expect the United States to assume the role of global policeman while other countries free ride. It is likely that Middle Eastern crises will transpire in the future, requiring America to respond. But over time, the long-term goal should be a doctrine whereby the United States is a regular defender of last resort and only an irregular first responder.

The assumption that the region can gradually become more stable with fewer American troops underpins any sound strategy of retrenchment in the Middle East. Fears of extremism and energy supply shocks will continue without a strategy that effectively addresses underlying causes of instability, which a disproportionately militarized approach cannot achieve. This highlights the centrality of promoting economic diversification across the region.

Over time, peak demand will strain countries that are grossly dependent on oil revenues. They will struggle to sustain budgets and maintain political stability. This will leave an already insufficient labor market ill-equipped to address a regional youth bulge that, until confronted head-on, will exacerbate unemployment, brain drain, and extremism. Saudi Vision 2030 and the country’s plan to use proceeds from their partial Saudi Aramco public offering to invest in new sectors demonstrates an understanding of the gravity of the situation, but it does not go far enough. The Saudis must champion a whole-of-society approach that unleashes the economic potential of women and invests in technologies to counter the Kingdom’s vulnerabilities to a changing climate.

Countries in the region should similarly utilize existing state-owned instruments like sovereign wealth funds to channel energy proceeds into domestic investment to develop nascent sectors and decrease vertical and horizontal inequality. Pragmatically, the United States should encourage constructive use of these remunerative instruments while retaining an end goal of developing economies that no longer need them. The United States should champion foreign direct investment in these sectors and leverage its economic heft to offer carrots contingent on progress in these realms.

Ultimately, America’s overriding interest is to create a stable and self-reliant region that does not require U.S. troops. But the current reality, which the United States contributed to, must be dealt with responsibly in order to provide a foundation for a long-term solution. A stable region demands less of the United States and allows for a shift towards a more modest role under which America can equitably burden-share, exchange intelligence, and jointly inflict punitive measures to combat Iranian machinations when advisable without increasing troop levels.

This sentiment is indirectly expressed in the 2018 National Defense Strategy, a blueprint that has won support across party lines. Both parties are slowly coming to understand that retrenchment is not synonymous with instability, yet it remains to be seen whether the way it is carried out will effectively balance long-term goals with short-term demands.

Peter Whiteneck is a student at American University. This essay was a runner-up in the 2020 John Quincy Adams Society/The National Interest student foreign policy essay contest. You can read the other winners here.