The Battle for the Future of U.S. Foreign Policy Has Begun 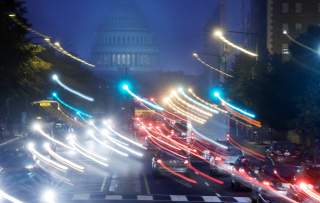 An incident of misplaced assertiveness took place in January when the House of Representatives passed the NATO Support Act prohibiting the executive branch from using any funds to facilitate U.S. withdrawal from the Alliance in any way. The legislation appears to bar a drawdown of U.S. troop levels in Europe and any effort to terminate U.S. membership in NATO.

Enacting the legislation seemed weirdly premature. President Donald Trump has not even taken any substantive actions that might diminish U.S. participation in NATO affairs. He has merely criticized the allies for their lack of burden-sharing in the collective defense effort and (correctly) suggested that NATO itself might be “obsolete” given how much the European and global security environments have changed since the Alliance’s birth at the dawn of the Cold War against the Soviet Union.

The constitutionality of such restrictions also is highly suspect. The Constitution makes the president the steward of foreign affairs. Presidents historically have enjoyed wide latitude regarding the interpretation, execution, and even termination of U.S. treaties. Chief executives have enjoyed even greater latitude regarding troop deployments, especially in noncombat situations, and the nature, extent, and duration of military commitments to implement treaties or other agreements. Congressional interference in the form of the NATO Support Act would be truly revolutionary—and not in a good way. It is a transparent congressional attempt to usurp the president’s rightful constitutional authority and seek to micromanage U.S. foreign policy.

The NATO issue is not the only case in which congressional efforts are underway to seize control of foreign-policy decisions from the executive. A faction in both houses is now pushing a measure that would prevent the White House from failing to honor U.S. obligations under the Intermediate Nuclear Forces (INF) Treaty until it expires in February 2021. Unlike in the case of NATO, the president has taken tangible steps against the INF. After accusing Russia of violating its obligations under the treaty, Trump announced that the United States intended to withdraw from the INF. It should be stressed that the issue is not whether the president’s policies on NATO or the INF are wise or misguided; the relevant issue is whether the Constitution invests the executive or Congress with the authority to make those decisions.

Greater congressional assertiveness on such issues is especially odd given how readily Congress has abandoned its own explicit constitutional authority to control the war power. Even as legislators moved to restrict Trump regarding NATO and the INF, there was no effective campaign to prevent him from implementing his decision to keep at least two hundred troops in Syria, despite the continuing lack of any congressional authorization for U.S. military involvement in that combat zone.

The bipolar nature of congressional behavior is striking. Congress continues the long pattern of abdicating its responsibility when it comes to decisions about whether to involve the republic in armed conflicts. The authors of the Constitution specifically gave the war power to Congress, but that branch has habitually deferred to the president since Harry Truman’s presidential war in Korea in 1950.

Throughout the succeeding decades, occupants of the Oval Office have either bypassed Congress entirely or sought vacuous “blank check” congressional resolutions. The 1964 Gulf of Tonkin Resolution and the 2001 Authorization for the Use of Military Force (AUMF) following the 9/11 terrorist attacks are examples of the latter. Lyndon Johnson’s 1965 invasion of the Dominican Republic, Ronald Reagan’s 1983 invasion of Grenada, Barack Obama’s air war in Libya, and the current U.S. military actions in Syria and Yemen are examples of the former. Bill Clinton probably deserves the award for the most brazen contempt of the congressional war power. Not only did he launch the Kosovo war without congressional approval, but he defied a House vote against giving him such authorization.

The recent vote of both houses to terminate U.S. participation in the Saudi Arabian-led war in Yemen is an encouraging step toward reviving the war power. But only time will tell if that effort is the beginning of a worthwhile trend. The successful effort of the Senate GOP leadership to prevent approval of legislation requiring an explicit AUMF for the Syria mission suggests that the Yemen vote was an outlier and that congressional abdication of the war power likely will continue in most cases.

Yet even as Congress evades its responsibilities in that most vital area, it is escalating its meddling and attempted micromanagement of other elements of foreign policy. For Congress to seek unprecedented, unconstitutional power with respect to nonmilitary aspects of foreign affairs while it continues abdicating the war power is shameful. Instead of trying to dictate policy on the INF and preserve the organizational dinosaur known as NATO against even modest reforms that the president might wish to implement, Congress needs to do a much better job of tending to its own duties and constitutional responsibilities.

Ted Galen Carpenter, a senior fellow in security studies at the Cato Institute and a contributing editor at the National Interest, is the author of twelve books and more than 750 articles on foreign affairs.