Bomb Iran? Trump Should Not Go to War For Saudi Arabia's Mistakes 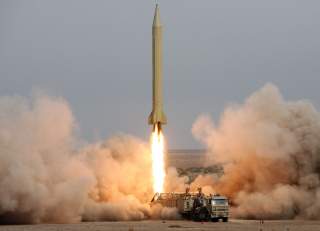 Last weekend’s attack on the Khurais oil field and the al-Abqaiq facility, Saudi Arabia’s largest oil processing plant, jolted crude markets over the short-term and added another layer of concern to a Middle Eastern region already teeming with problems. U.S. officials have reportedly provided Riyadh with intelligence suggesting the attack, done in part by cruise missiles, may have been launched from Iran. While the Saudis have yet to attribute responsibility, officials in the Kingdom have assessed the assault was conducted by Iranian-made weapons. Who launched the attacks is only part of the analysis. It’s critical to remember that it was Saudi Arabia, not the United States, that was attacked. But Washington doesn’t seem to care about that distinction, conflating core U.S. national security interests with Saudi ones.

The senator from Delaware is wrong, as are the rest of the political class in Washington girding for a confrontation. Instead of succumbing to the emotion of the moment, President Trump should de-escalate before making a decision that will cost the U.S. and Americans dearly.

1. Saudi Arabia was attacked, not the United States:

Abqaiq is a Saudi-owned facility operating on Saudi soil, churning out Saudi crude for the Saudi treasury. A drone or missile assault on the plant may be a direct infringement of Saudi Arabia’s sovereignty and territorial integrity, but it is not an attack on the United States or its people. If there is to be a response, it should be planned and executed by Riyadh, perhaps in conjunction with its like-minded partners in the Persian Gulf—all of which have an interest in ensuring they can continue to export their oil in a stable and predictable fashion. While Saudi Crown Prince Mohammed bin Salman would certainly like Washington to clean up his mess, the U.S. Armed Forces are not a Saudi mercenary force to be deployed at the beck and call of the royals. The U.S. military exists to defend the United States and the American people, used as a last resort when core national security interests are threatened. No foreign nation, ally or partner, should determine when the United States does or does not use force. Washington should not allow a foreign country to drag the U.S. into quarrels it has little to do with.

2. War with Iran would be a costly disaster:

A conflict with Iran is not only a recipe for more insecurity, but also a violation of the Trump administration’s own National Security Strategy and National Defense Strategy. Both documents rightly anticipate a world where competition and rivalry between the great powers increasingly dominate the global security landscape. Diving head-first into the Middle East and devoting more U.S. resources into a region becoming less geopolitically vital undermines efforts to pivot away from “endless war” and toward deterring great power conflict.

3. Attacks on oil installations are likely to increase in the event of war:

Short-term increases in crude oil prices is unfortunate, but there is not a significant, long-term disruption to global oil supply. What would cause long-term disruption, however, is a military escalation that could quickly transition into another endless war. The Saudis are already addressing price increases quickly by releasing some of their spare capacity. Launching a retaliatory strike on Iranian targets, particularly oil processing facilities as some senators are advocating, would only further reduce oil supply in the market and exacerbate disruptions, perhaps leading to another recession.

There is unjustified confidence in Washington about the U.S. ability to control the escalation ladder. Those lobbying for military retaliation assume that the psychological blow of the operation would be so devastating to Tehran that Iranian leaders would choose not to respond for fear of what might come next. This is a delusional assumption to make—especially when the country in the crosshairs has a history of upping the ante rather than sitting on its hands. Many now longing for escalation are some of the very same people who confidently predicted that maximum pressure would force the Iranians to capitulate on their foreign policy. The reality, of course, has been a more aggressive Tehran and a higher risk of war in the Persian Gulf. Iran has numerous assets in the region it can use to retaliate and cause headaches for the region, including more harassment of civilian tankers in the Gulf. Any U.S. military strike is likely to swiftly escalate into a conventional war nobody wants. The best way to avoid a war is not to start one.

5. The U.S. doesn’t belong in the Sunni-Shia contest:

As my colleague Benjamin Friedman aptly points out, “Washington should not pick sides in the Sunni versus Shiite fights in the region, nor should it risk U.S. lives and dollars to clean up Saudi Arabia’s mess.” The rivalry between Riyadh and Tehran is a rivalry for power between two countries with decades of bad history between them. Despite the stereotype of Saudi Arabia being an ally and Iran being an enemy, the truth is both have contributed enormously to the region’s dysfunction. There are no good guys in this ongoing fight.

The past three presidents have won promising less needless intervention and a more humble, practical foreign policy. Part of Donald Trump’s success as a presidential candidate was his commitment to preventing Washington from entering into new wars and ending “endless wars.” He should keep one of his most important campaign promises rather than listening to the stagnant, systemically bankrupt Washington establishment.