Can NATO Shift Its Mission from Deterring Russia to Tackling Terrorism? 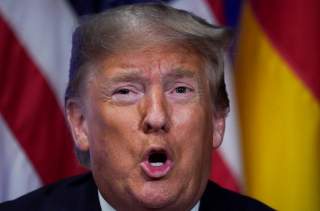 When asked to cite NATO’s top security priority today, most point to the Russian Bear in the east. This isn’t without precedent; the transatlantic alliance was literally established in 1949 to defend the Euro-Atlantic area from Soviet aggression. 70 years later, NATO’s strategic direction is still very much oriented towards Moscow, which remains a formidable power despite its economic difficulties and frosty diplomatic relations with the West.

French President Emmanuel Macron, however, has a different opinion about how NATO should concentrate its resources and attention. Russia and China are not the enemies of NATO, Macron said days before the French leader flew to London for a one-day meeting of the alliance. “Our common enemy today is terrorism, which has hit each of our countries,” the French leader asserted.  After all, Moscow and Beijing are rational actors that can be deterred and reasoned with; terrorist groups are a whole different animal.

Macron wasn’t absolving Russia of responsibility as much as he was trying to shift the conversation. It escapes no one that despite the ritualistic recitations within the halls of NATO about unity, solidarity, and values, member states have conflicting views on what security concern the alliance should be spending most of its time on. Poland and the Baltic States remain terrified of a Russian neighbor that has annexed the Crimean Peninsula, stirred up a rebellion in Eastern Ukraine, invaded Georgia more than a decade ago, and intervened in European politics with ever more refined disinformation operations. To the south, Italy has been pleading for NATO to focus on illegal migration. There are also significant differences within the alliance on whether diplomatic outreach to the Kremlin is appropriate, how strongly NATO should increase its deterrent in the eastern flank, and whether a common position on China should be adopted.

Macron’s pitch would at least bring some unity-of-effort into NATO. All member states have a national security interest in defending their people from terrorism. Many of them have been victims; France, Germany, Belgium, the United States, the United Kingdom, and the Netherlands have all suffered attacks over the last four years. Squelching terrorism would seem like a perfect rallying point for all 29 (soon to be 30 members).

And yet it’s not as easy as it sounds.

For one, terrorism is a very tricky definition to pin down. Different countries have different criteria and views about what groups should be designated. While all NATO members would agree that Al-Qaeda and the Islamic State would qualify as terrorist groups, expanding the net will be quite difficult as long as Turkey is around. Ankara, for instance, continues to insist that Kurdish units in the Syrian Democratic Forces be classified as terrorists due to their connection to the Turkish and Iraq-based PKK. Turkish President Recep Tayyip Erdogan has gone as far as blocking the adoption of a NATO defense plan for the Baltics in order to force a concession on this front. That concession is about as likely as Turkey giving the S-400 system back to the Russians.

As Macron admitted in London this week, “I am sorry we do not have the same definition of terrorism around the table. When I look at Turkey, they now are fighting against those who fight with us...shoulder to shoulder, against Isis.” Fighting over which group should be listed and which should not is an inauspicious start to the unity Macron hopes to achieve.

Second, Europe and the United States are not exactly peas in a pod on the terrorism issue. While NATO is formally a member of the U.S.-led counter-ISIS coalition, NATO’s individual members have been unable to find consensus on managing the thousands of ISIS militants who remain locked up in northeast Syria. While Washington has been lobbying aggressively for European governments to repatriate their nationals and put them on trial, European political leaders have balked due to the security issues associated with returnees and concerns about whether enough sufficient evidence exists to support a conviction.  Berlin is only now reviewing cases of returning German ISIS fighters because Turkey has begun deporting them.  Paris is staunchly opposed to readmitting French jihadists on its soil.  London would rather strip the citizenship of British ISIS members than haul them into a courtroom.  Every single NATO member may be fine with killing the bad guys, but getting unanimity within the alliance on how to detain and prosecute them is a tall order.

Finally, there are no military solutions to the problems posed by terrorism.  NATO is a military organization, which means it’s predisposed to thinking about challenges in military terms.  You can’t defeat terrorism by deploying 30 combat ships, 30 land battalions, and 30 squadrons over 30 days.  Nor can you bomb terrorism out of existence.

Terrorism is an amorphous, unconventional nuisance hat can occur randomly and at a spur of the moment. Attacks can be conducted with the crudest of weapons. Terrorists in Europe have executed plots that are basic and unsophisticated but deadly, like a driver using his truck to run over pedestrians in a Berlin Christmas market or a lone extremist slashing people with a knife at the base of the London Bridge.  Counterterrorism is best left to intelligence agencies and police departments that can cultivate sources, pick up trends, and work with local communities to prevent attacks from taking place.  A multilateral military alliance that crosses an ocean is not suited for this job.

Macron may think that by branding terrorism as a universal danger to all, he is helping to bring solidarity back into NATO’s ranks. But he has completely misjudged the nature of the threat and NATO’s capacity to fight it.