Catalonia and Spain Are Reaching the Breaking Point 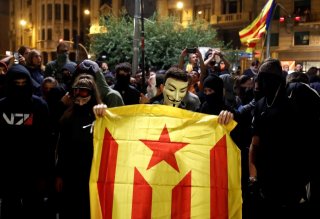 There are good reasons for Catalonia to become independent. This region of Spain, with a population of 7.5 million, has its own language and traditions. It has a long history of semi-detachment from the rest of the peninsula. The County of Barcelona was created in 801 by the Carolingians, when they pushed the Moors south. Barcelona joined the Kingdom of Aragon in 1137, which in turn merged with Castille to form Spain in 1479. Catalonia retained its autonomy until the War of the Spanish Succession, when it backed the losing pretender. Self-government was briefly restored in the 1930s, but Catalan nationalism was brutally suppressed by Francisco Franco, who went so far as to ban the Catalan language.

Yet those arguments seldom come up when I ask supporters of independence why they want to leave Spain. The first thing they usually mention is that Catalonia pays more into the Spanish treasury than it takes out.

Which is true, but not unusual. Bavaria is richer than other German states. California and New York pay more money to Washington DC than they get back. The Paris region accounts for almost a third of French economic output. Holland subsidizes the rest of the Netherlands.

Americans, Germans, the French and the Dutch accept those differences, because they feel part of one nation. Catalans and Spaniards don’t.

That typically comes out after a bit of prying: Catalan separatists will speak disparagingly of other—especially southern—Spaniards, whom they stereotype as backward and lazy.

Like all stereotypes, there is a kernel of truth in this. The south of Spain really is economically less developed and socially more conservative than Catalonia, which has historically been more outward-looking. Catalonia industrialized relatively early, giving it a broader middle class. It still gets a larger share of its GDP from trade than other parts of Spain.

But the differences between Spanish regions aren’t that unusual in general either. There is a bigger economic gap between Lombardy in the north of Italy and Calabria in the south. Catalans may be a little more liberal and internationalist, on average, than Andalusians and Castillians, but “red” and “blue” America are much more divided.

Speak to non-Catalan Spaniards, on the other hand, and the typical response is: what makes the Catalans so special? Catalans are seen as arrogant and entitled. Their demands are brushed aside.

It’s this lack of empathy and respect that makes it so hard to find a solution.

During the last economic crisis, a right-wing government in Madrid convinced the Constitutional Court of Spain to revoke some of Catalonia’s autonomy statutes, including the one that described the region as a “nation.” It also forced Catalonia to cut spending on its nominally autonomous social security system.

When support for independence rose, and Catalan leaders petitioned Spanish Prime Minister Mariano Rajoy for talks, they received no response. Rajoy refused to negotiate. His People’s Party believes in one Spain. Separatist parties, once on the fringe of Catalan politics, grew in the polls. The ruling party of Catalonia switched from demanding more autonomy to asking for a legal referendum on independence. Rajoy said no. When annual demonstrations for Catalan self-determination drew more than 1 million people to Barcelona, still Rajoy wouldn’t talk.

When an exasperated Catalan government, now led by separatists, held an independence referendum over the objections of the Spanish government and Constitutional Court in 2017, Rajoy finally acted: by sending in riot police to prevent Catalans from voting and suspending home rule for the first time in Spain’s democratic history. Half the population, opposed to independence, boycotted the referendum. Catalonia was placed under direct rule from Madrid. Catalan leaders were arrested and convicted of sedition against the Spanish state. They are serving prison sentences of ten years and more.

It’s not hard to imagine how Catalan unilateralism and Madrid’s ham-fisted response may have radicalized Spaniards on both sides of the issue, and that is borne out by research. Supporters of Catalan independence increasingly identify as exclusively “Catalan” and opponents as exclusively “Spanish.” Those identities used to overlap.

Separatists used to reject violence wholeheartedly. Now a majority believes violence is necessary to achieve their goal of independence.

Catalan secessionism has stirred a nationalist reaction in the rest of Spain. One in two Spaniards believes Catalonia has too much autonomy. 15 percent voted in the last election for Vox (“Voice”), a neo-Francoist party that wants to dismantle Spain’s quasi-federalist system altogether. The mainstream right, which lost power in 2018, argues for suspending Catalan self-government until the region complies with the Constitution.

The hope is that Socialist Prime Minister Pedro Sánchez, who came to power in 2018 with the acquiescence of Catalan parties in the Spanish parliament, will find a way out of the crisis by giving Catalonia more autonomy, not less. If, like the Basques, the Catalans could collect their own taxes and home rule would become irrevocable, it might just appease voters in the middle.

That would require constitutional changes, though, and a two-thirds majority, which Sánchez doesn’t have. Conservative parties, which hold 150 out of 350 seats in Congress, and 109 out of 265 seats in the Senate, consider him a “traitor” for even talking to the Catalans, much less making any concessions.

Hardline separatists in Catalonia are unconvinced. Whatever Sánchez offers will be too little, too late for them. The time to take the wind out of the independence movement’s sails was ten years ago, when Catalans only started to consider breaking away because they couldn’t get a hearing in Madrid.

Rajoy and many other Spaniards thought the Catalan issue would somehow go away on its own. Of course it didn’t. Signal to people that you don’t take their concerns seriously, allow no democratic recourse to address their grievances, and they will turn to other means.

Nick Ottens is an opinion writer from the Netherlands who lives in Barcelona, Spain. He blogs at atlanticsentinel.com.