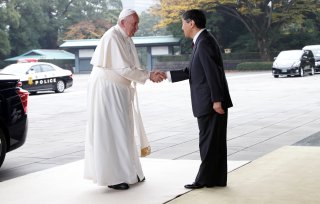 Last month, John C. Wester, the Archbishop of Santa Fe, California, issued a pastoral letter calling for nuclear abolition and supporting the UN Treaty on the Prohibition of Nuclear Weapons. Archbishop Wester argued that serious conversations about universal verifiable nuclear disarmament need to be had in New Mexico and across the world.

Archbishop Wester sat down with co-host Tom Collina in this week’s episode of Ploughshares Fund’s Press the Button podcast to discuss why a pastoral letter was important to write at this time, and why, as Archbishop of Santa Fe, he felt especially compelled to write it.

As New Mexico is home to the Los Alamos and Sandia nuclear weapons laboratories as well as the nation’s largest repository of nuclear weapons at Kirtland Air Force Base in Albuquerque, its citizens are personally impacted by the production of nuclear weapons. Wester argues: “let's get the money for these labs but let's do it for things that are positive and good for humanity, not things that might destroy humanity.”

The Archdiocese of Santa Fe, where Archbishop Wester is based, is named for the “Sacred Faith” of Saint Francis, the patron saint of the environment and tireless advocate of peace and for the poor. “Ironically, the U.S. government probably spends more on nuclear weapons within the boundaries of the Archdiocese of Santa Fe than any other diocese in the country and perhaps the world,” he writes in his pastoral letter. “It takes lots of money to create and maintain our nuclear arsenal,” Archbishop Wester notes. “Clearly the money that we're spending on this is … taking away from money which could be spent on such important areas of our world.”

Important areas like healthcare, education, and infrastructure are why the Archbishop used his letter to advocate for redirecting resources to peaceful objectives such as cleaning up nuclear contamination and addressing climate change.

And as Archbishop Wester points out, the Catholic Church has a strong stance on this issue; in fact, the Vatican was among the first parties to sign and ratify the Treaty on the Prohibition of Nuclear Weapons. Pope Francis, as the Archbishop says, has given the ratification of the TPNW “even more force now saying that even to have [nuclear weapons] is immoral.” To remind people to consider their role in the current nuclear danger the world is facing, Archbishop Wester installed a sign at the Shrine of Our Lady of Guadalupe in Santa Fe with a quote from Pope Francis on the immorality of possessing nuclear weapons.

Archbishop Wester’s message is that “we, the people, are speaking clearly that we believe that we do not want a second arms race.” He continues: “I’m not naive, I know this is going to take a long time, this is not going to be done overnight, but we have to start the process in earnest.”

Although many religious leaders work towards nuclear abolition, President Biden is Catholic, so the Catholic Church’s stance on this has even more significance now. As the Archbishop remarks, “we need leadership that's willing to really make those hard decisions and talk with other nations and sit down and roll up our sleeves and really see how we can come about a world without nuclear arms.” We hope President Biden is listening.