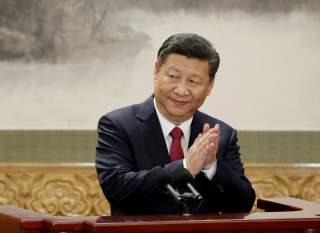 Editor’s note: This essay was a runner up in the John Quincy Adams Society’s 2019 Student Foreign Policy Essay Contest, which asked students across the country to answer the following question: Are the United States and China on a path to conflict?

The strained relationship between China and the United States appears to worsen with each passing day. Tensions have risen due to China stepping up its theft of intellectual property, the Trump administration initiating a trade war with China, and the labeling of China as a threat to U.S. interests and ideals. In light of such escalation, some scholars claim that China simply cannot rise peacefully and should be met with an increase in U.S. military capabilities. Despite these troubling developments, the United States and China are not on a deliberate path to conflict, as each country has strong domestic incentives to avoid engaging in war with the other.

China will try to avoid any war with the United States, as its cornerstone policy of maintaining domestic stability would otherwise be placed in jeopardy. Chinese leaders are “obsessed” with social stability, since social unrest threatens the survival of the Chinese Communist Party (CCP). The Tiananmen Square protests were a major wake-up call for the CCP, as the Party nearly collapsed due to mass social protest. Since then, many CCP leaders, including Xi Jinping, have believed that “social stability overrides all other considerations.” In order to ensure stability, China has implemented a social credit system that punishes or rewards certain behavior, transformed the nation into a surveillance state, and even created mass detention camps to “deradicalize” alleged extremists. In “both foreign and domestic policy” the CCP is forced to preemptively consider how new policy would affect social stability with the knowledge that “foreign aggression sparks domestic upheavals.”

The mechanism for this is simple: a war between the United States and China would disrupt Chinese domestic stability by damaging the Chinese economy. For years, China has sought astronomical GDP growth rates, as social stability tends to rest “on the government’s ability to deliver continued growth.” This drives the social contract between the CCP and the Chinese people: “absolute loyalty” in return for economic prosperity. War is ultimately a “terrible way to grow an economy.” The costs of war are enormous, including the devastation of land, capital, and labor, and the conflict would almost certainly invite social unrest and place the CCP in great danger.

The only potential economic upside of war would be from government-directed investment. Yet peacetime China already makes heavy use of this tactic. Through China’s state-capitalist system, the CCP employs preferential treatment when granting subsidies or investing in industries. A major example of this economic strategy is  “Made in China 2025,” a policy to accelerate production of high-value domestic goods and services. With state-driven investment already rampant, the potential gains from war investment are limited.

In addition, China is already feeling the economic repercussions of the trade war and wants to settle the dispute rather than risk domestic instability. The trade war has amplified China’s slowing economy, and if Trump were to enforce additional tariffs, it would be “catastrophic” for Chinese growth. In 2018, China’s economic growth rate hit its lowest point since 1990, and China has also lowered its 2019 economic growth target in light of its economic slowdown. Consequently, Beijing has become more “anxious for a trade deal” and is well aware that a lengthy trade war will be “especially detrimental to its own domestic economy and social stability.” An actual war with the United States would therefore only exacerbate China’s economic woes and contradict Xi Jinping’s desire to deescalate the trade war.

The United States has strong domestic incentives to avoid a war, too. For more than fifteen years, the U.S. public has almost always placed the economy as its top priority in polls. Politicians like President Donald Trump are aware. Trump has frequently touted economic performance under his administration, pushed for looser monetary policy, and negotiated a new trade agreement with Mexico and Canada. Like Xi, Trump seems eager to settle the trade war, especially since it hurts “Trump-supporting regions of the country the most.” The U.S.-Chinese economic relationship is simply too big to fail. Subsequent administrations will have the same incentives to seek cooperation with China, and voters view China more favorably when it is perceived as less of an economic threat. Shocks from a shooting war between two of the world’s two largest trading partners would devastate the U.S. economy and would thus galvanize the public into demanding political change. Since economic collaboration with China is so central to prosperity, U.S. politicians will think twice before getting into a war with China.

Finally, so long as the threat of China remains abstract, people in the United States have no reason to demand war in the first place. Nations respond more intensely to local and imminent threats than to abstract threats, and for many years, the public has mainly identified China as posing abstract threats via job losses and trade deficits. So long as China avoids posing imminent national security threats, war will continue to remain unlikely, and the U.S. public will remain focused on abstract economic concerns. As in China, nationalism and national security fears aren’t urgent enough to make the public demand a showdown.

Due to the United States’ and China’s domestic incentives to avoid war with one another, neither wants to go far down the path to conflict. Ultimately, the costs of war are too great, and war between the two nations would almost certainly result in a stalemate anyway. At best, Washington and Beijing will be able to settle their disputes, and at worst, they will begin a new Cold War. However, good intentions are not always enough. Other international issues, such as Taiwan’s desire for independence, could potentially drag the United States into war with China. Although China and the United States will do all they can to avoid this, an unintentional war, fought against each state’s domestic interests, always remains a possibility.

Eric Asen is a sophomore at Vanderbilt University studying Political Science and Economics. He works as a research assistant, writes for the Vanderbilt Political Review, and intends to pursue a career in international politics.