China's Belt and Road Initiative: Is It Really a Threat? 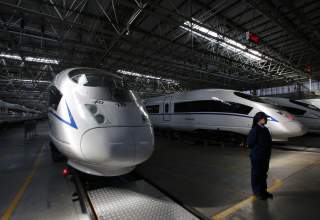 Though policymakers in Washington might raise their eyebrows towards any ambitious project from a strategic rival, it’s worth keeping an open mind on the BRI.

From the first Transatlantic cables being laid in the Nineteenth Century between then-rivals of the United States and Great Britain to the reconstruction of Europe after the Second World War, infrastructure projects can be immense boons to global stability. An added benefit is that such projects occupy much of the ambition of governing elites-ambition that might otherwise be targeted towards the settling of grievances abroad.

Should developing nations be fortunate enough to see real gains in prosperity as their infrastructure develops, their sovereignty and security will likewise increase, reducing fears of the Chinese owning them through investments. After all, in the United States’ own experience supporting Europe hardly led to blind compliance in foreign affairs—France, a major beneficiary of American postwar aid for redevelopment, spent much of the Cold War asserting a quite independent foreign policy.

Most important from the U.S. perspective, the BRI does not reduce long term strategic options for the United States. The majority of international trade is oceanic in nature and Chinese policymakers know the United States is the dominant power at sea. This means the BRI trade directed towards the Indian Ocean is less a direct challenge to the United States and more of a potential vulnerability for the Chinese.

With the main thrust of the project wisely following inland routes, it is hard to see the challenge to the American position as Beijing increases transportation links in places of minimal interest to Washington or U.S-based private investment. Knowing that American strengths are found at sea and diminish the further into Eurasia one goes, Chinese policymakers should pursue the best cost/benefit ratio—this will be found in Central Asia and the Caucasus. Here, the far weaker but more immediate Russia remains a larger salient issue for them than the distant United States—a trend that will only increase if the U.S. decreases military engagement in the Middle East.

The American foreign policy strategist may fear closer relations between Russia and China. However, it is not the BRI that determines the nature of those countries’ bilateral relations. If anything, more developed and prosperous Central Asian republics that have historic relations with Russia, but increasing financial ties to China, may increase long-term rivalry between the two powers. BRI may be seen as beneficial for keeping America out of the region by Moscow, but its challenge to areas of traditional Russian hegemony will also not be ignored. If American policymakers want to prevent further drawing together of their Russian and Chinese counterparts then it would be wise to keep a hands-off approach and not force them into a corner.

Nowhere is this danger of American overreach which could cause negative consequences for Washington more on display than Syria. Crippling American sanctions threaten to sabotage this small nation’s reconstruction efforts and ability to attract capital from abroad. This has already led to Chinese plans to circumvent U.S. sanctions regimes in ways that maximize Beijing’s influence in the country.

Furthermore, the Syrian Civil War, a conflict heavily fueled by foreign actors—as well as one of the most expensive secret projects in CIA history—has led to the growth and empowerment of Al Qaeda and other violent extremists in the region. American efforts to sabotage Syrian redevelopment will exacerbate the state failure extremist actors thrive in. U.S. policy should not oppose the reconstruction of Syria, which will make the state more capable to confront terrorists in the region.

When American policymakers look at China’s growing influence, they are right to detect a challenge. Rather than jumping to a dour prognosis, they should consider there is an opportunity to be had through constructive alternatives rather than reflexive opposition.