A Clash of Generations over American Leadership? 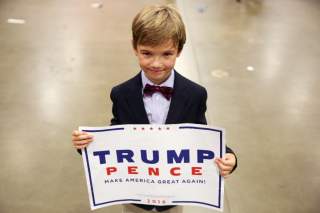 For some time now, scholars and commentators have been aware of a worrisome gap between public and elite opinion with respect to U.S. foreign policy. Elites generally embraced a grand strategy of primacy (also called global hegemony or deep engagement) in which U.S. military power was deployed to underwrite global security, and advance global prosperity and human rights. The United States, in this sense, is the main provider of global public goods. The global policeman. Or, as Michael Mandelbaum put it, Goliath.

In contrast to most foreign-policy elites, clear majorities of Americans, writ large, believed that the U.S. military existed chiefly to defend the United States and its economic and security interests—not those of others. These slightly differing impulses often worked hand in hand. A large and active U.S. military that was focused mostly on U.S. security and prosperity typically helped others.

But if and when Americans sensed that U.S. foreign policy was harmful to those ends, public support collapsed, as we saw in 1993 after the failed humanitarian mission in Somalia, or in 2004, when the war in Iraq failed to play out as that war’s advocates claimed that it would. Writing in 2005, Mandelbaum noted that Americans “have never been asked to ratify their country’s status as the principal supplier of international public goods, and if they were asked explicitly to do so,” he predicted, “they would undoubtedly ask in turn whether the United States ought to contribute as much to providing them, and the other countries as little.”

In short, he concluded, “the American role in the world may depend in part on Americans not scrutinizing it too closely.”

Thanks, in part, to Donald Trump, it seems unwise to count on the American people not scrutinizing U.S. foreign policy too closely.

Trump exploited the gap between the elites and the public at large with ruthless efficiency on his path to the GOP nomination, and then in his general election win over Hillary Clinton. As president, his rhetoric has continued to shine the light on the public vs. elite divide, though his actions have largely conformed with the primacist consensus.

Increasingly, however, we see not merely a disconnect between the public and elites, but also among different age groups within the American electorate. And the age cohort most skeptical of American global leadership, at least as it has been practiced for the last several decades, is the Millennial Generation, those men and women born between 1981 and 1996. These individuals did not arrive at their views because of Donald Trump; a majority of voters under the age of forty-five voted for Hillary Clinton.

So, what do Millennials generally believe? And why do they hold such beliefs? Building on earlier reports the Chicago Council on Global Affairs issued a new report focused on answering these questions.

One of the key findings emerges from a deeper analysis of a key trend question. For decades, the council has asked Americans whether they believe that the United States should “take an active part in world affairs.” Of the six age cohorts surveyed, Millennials registered the least support (51 percent) for this position, leading to some speculation that they would be less willing than their parents and grandparents to “take up the mantle of global leadership.” This new report acknowledges, however, that the binary choice has failed to recognize that “respondents mean many different things when they say the United States should stay out of, or take an active part in, world affairs.”

Put differently, global engagement is not so much a question of whether, but rather of how? And for what purpose? Framing the question this way puts the generational divide in even sharper contrast. Even when taking partisanship into account, the differences across generations remains politically significant. Younger Americans are less likely than their older counterparts to view the United States as the greatest country in the world, and can therefore better discern when American actions abroad lead to unhappy ends. Related, they are less supportive of the use of military force, oppose higher defense spending, and are generally skeptical of militant internationalism.

This isn’t to say younger Americans don’t support active engagement, however. On the contrary, they appear to be in relative agreement with older Americans regarding the need to share global leadership with others. Additionally, Millennials are somewhat more supportive of free trade, and have more positive attitudes toward the effects of globalization upon the U.S. economy, than men and women born in earlier eras.

In that sense, we should consider moving beyond euphemistic terms such as global leadership and global engagement, and cast the generational divide as one between hawkish engagement and militarism versus generally peaceful engagement through commerce and cultural exchange (i.e. leading by example). Such a framework is consistent with that used by the University of Pennsylvania’s Walter McDougall, who famously described the different impulses in U.S. history as that between the promised land and the crusader state.

Going forward, as Americans subject U.S. foreign policy to greater scrutiny, this generational gap has the potential to redefine the role that the United States plays in the world. And, once the Millennial generation is firmly in control, we might see U.S. leadership practiced less through costly and counterproductive wars, and more through mutually beneficial trade and diplomacy.