A Closer Look at the Intersection of Gender and Security 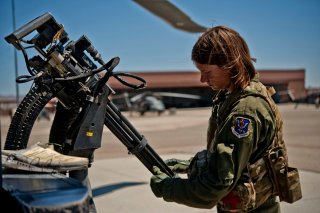 While there has been progress in advancing civil rights and visibility for women and transgender folks, there is a long way to go to build a safe and secure world for all. Last week’s episode of Ploughshares Fund’s Press the Button podcast commemorated Women's History Month, International Women’s Day, and International Transgender Visibility Day by addressing this issue head on.

Co-host Michelle Dover sat down with Dr. Alexi Drew and Anuradha Damale to discuss what security means, how it affects those with intersectional identities, and what needs to change in our institutions.

As demonstrated by recent global events—COVID-19, protests for racial justice, and more—the definition of “security” has broadened in the collective consciousness to equally reference human security. Anuradha Damale, a policy fellow at the British American Security Information Council (BASIC), sees the most relevant facets as “individual security as people and as citizens. Whether that be climate security, food security, economic security … then also the security of being able to exist as who you are.” This is a noted change from the traditionally held definition of security that focuses on military-based threats, and it is one that is needed in order to address urgent challenges.

Damale remarks that people are taught that “the ultimate aim of the government is the security of its citizens.” However, she asks, “who decides that? Why does that decision live with a small group of people who don't take into account the views of the people who they are trying to keep secure?” This question of power shows why advocating for those with intersectional identities is so important.

Alexi Drew, a senior analyst at RAND Europe, gave an example of her experience at a prominent nuclear policy conference. She recalls speaking at the event, looking around the room, and asking herself: “How is anyone going to be [innovatively] thinking in this space and actually break[ing] out of the mold of security that we've been operating under for sixty-odd years when the only people thinking about [these ideas] are all the same?” Empowered by this realization, Drew decided to share her perspective as a trans woman in this space, remarking: “The nature and the systems of how … the field operates forces people to make really difficult decisions, which is ridiculous.” This situation Drew found herself in emphasizes the role that institutions within the field play to reinforce these power dynamics as well as what can be positively changed when we challenge them.

Damale remarks that “organizations can just take the blame off themselves and be like ‘the field is like this, so we can't do anything.’” But instead, “there's a two-way symbiotic relationship … between how we treat each other as a field … the way that we carry out our work and how we exist as organizations.” She explains that “diversity is not an end goal; diversity is a process … through which you are achieving equity. Equity is the goal.” But, the challenge is that many times, this process is not quantifiable, and organizations are not incentivized to invest in the process.

Drew points out that most of the time this is not coming from malicious intent, but rather from a lack of knowledge and education. Institutions, most of the time, “don't have many people who are actually from a wide array of different types of diversity.” This means that oftentimes people who do have intersectional identities have to be the ones to educate their peers and colleagues, which “can be really draining,” Drew says. As a result, organizations often only consider certain aspects of diversity rather than the full picture.

Although there has been much progress in advancing civil rights and visibility for women and transgender folks, it's clear that more progress is needed. This is especially apparent in the national security field, and conversations such as these between Dover, Damale, and Drew are an important way to address this and educate people on the work that needs to be done.