Conflict with China is Not Inevitable 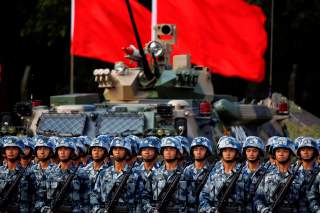 As China rises and America’s interventions in the Middle East fade away, a stream of proclamations from the foreign policy commentariat has announced a return to great power competition. Short of a Soviet-like collapse, the most important international security question of the twenty-first century will be whether and how the United States and China might coexist in peace. The odds are good that they will if Washington stays focused on its strict national security interests.

Many of the brightest minds in international politics have already weighed in, and their conclusions are worth reviewing in brief. G. John Ikenberry has argued that the United States should work “to accommodate a rising China by offering it status and position within the regional order in return for Beijing accepting and accommodating Washington’s core strategic interests, which include remaining a dominant security provider within East Asia.”

Naturally less optimistic about institutions’ ability to mitigate conflict, John Mearsheimer argued in the conclusion to The Tragedy of Great Power Politics that if China’s economy continues to grow “the result will be an intense security competition with considerable potential for war. In short, China’s rise is unlikely to be peaceful.” Similarly, Graham Allison declared that the United States and China are Destined for War, tragically unable to avoid the “Thucydides Trap.”

Overlooked in the debate between Ikenberry’s institutional optimism and Mearsheimer’s pessimism are other scholars—including Jennifer Lind, Charles Glaser, and Michael Beckley—who have presented a series of incisive arguments which, in combination, outline the basis for, if not a fully tranquil twenty-first century East Asia, an East Asia where the security dilemma will exist below the surface rather than bubble over into destructive violence.

Undoubtedly, there has been a litany of disturbing signs regarding the future of Uncle Sam’s relationship with the Middle Kingdom, particularly the escalatory trade war, the Trump administration’s decision to brand China a “strategic competitor” in the 2018 National Defense Strategy, and China’s militaristic approach to the South China Sea. But luckily, several factors—geography, technology, and the sheer range of policy options available to the United States—point to the conclusion that conflict is fully avoidable. The United States and China are not destined for war. However, staying off the path to conflict will be largely up to the U.S. foreign policy establishment—a worrying admission given that establishment’s recent failures.

Geography means that a U.S. invasion of mainland China is virtually unthinkable, as is a Chinese invasion of the United States. Today’s Pacific is far more security-rich than Central Europe in 1914 or 1939. There, an enemy taking and holding crucial territory was a legitimate fear. Of course, the roots of pessimists’ fears do not stem from a fear of large-scale invasion launched by the United States or China against the other great power. Rather, there are three arenas where conflict between the United States and China is most likely: the South China Sea, the Senkaku Islands, and Taiwan.

China views itself as the rightful first-order power in East Asia. Assuming China’s capabilities continue to grow, it will likely use its power to the shape the region towards its interests. It is no secret that the Republic of China’s sovereignty has long bothered the Communist Party of China. The People’s Republic of China will probably use some combination of diplomatic, economic, and political power to undermine Taiwan.

If future U.S. leaders decide that Taiwanese sovereignty is within the purview of America’s strict national interest, then conflict will be difficult to avoid. However, if (somewhat coldly) the United States recognizes Taiwan for what it is—a small, distant island with no direct impact on America’s ability to procure national security for itself—then conflict, at least over Taiwan, can be avoided. Even the conquest of Taiwan would not make China a regional hegemon, nor would it provide China with the ability to project significant power into the Americas. A reunified China is not going to exert military power in Hawaii, Mexico, or Peru anytime soon.

For the foreseeable future, China will have enough on its plate in its own backyard. Japan, South Korea, India, Vietnam, and Australia all have an interest in preventing Chinese dominance in Asia. America shares that interest, but reaching a balance of power in East Asia does not necessitate extensive security guarantees, nuclear umbrellas, and bellicose rhetoric focused on containing China at every point.

Perhaps counterintuitively, the best path to a regional balance of power is U.S. withdrawal. Withdrawal would provide Asia’s “middle powers” with an incentive to balance against China by increasing their military capabilities, which may include the pursuit of nuclear capabilities. Rather than ceding regional hegemony to China, retrenchment would facilitate what Michael Beckley argues is an already emergent balance of power in the region. China’s aggressive maritime claims and the proliferation of anti-access/area denial (A2/AD) systems to China’s neighbors give reason to doubt that China will be capable of establishing full control of either the South or East China Seas. The middle powers can stop China from seizing such prerequisites for regional hegemony.

Pulling back from East Asia will also eliminate potential flashpoints where conflict between the United States and China is most likely. As Charles Glaser has pointed out, “[p]rotecting U.S. allies in Asia might require the United States to engage in political skirmishes and military competition that will strain its political relations with China.”

Some amount of insecurity between the most powerful actors in the international system is inevitable. Intentions are inscrutable, and states must often fear the worst in one another. However, the inevitability of a security dilemma must not be conflated with the inevitability of intense conflict or outright war. Even the most hardened neorealists recognize that there is room for choice in how states think about and procure security. International politics is not mechanistic. Each potential flashpoint in the U.S.-Chinese relationship is in East Asia. This means that at each flashpoint, America will have the option of backing down. The United States and China are on a path to tension, but it is up to future U.S. administrations to responsibly manage those tensions.

If policymakers overcome their myopic obsession with remaking the world in America’s image, there is no reason to assume tensions must escalate into full-blown military conflict. The choice between war and peace may depend upon the prudence of U.S. foreign policy decisionmakers. If recent history is any guide, this should provide little comfort. Here’s to hoping the next generation exercises more restraint than the last.