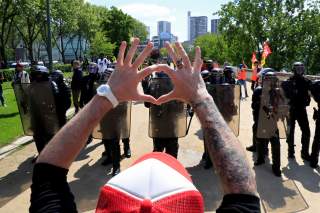 Human beings need an identity. Together with self-respect, it forms the core of each individual’s life-explaining and shaping behavior. It is found by comparing themselves with people “on the other side of the hill.” Identity is conducive to depict those other people as enemies or opponents. The search for identity thus sows the seeds of confrontation—even of conflicts among nations.

Without such confrontations, individuals lose identity and turn against fellow citizens and own political system to redefine who they are as an effort to regain their identity. Societies and nation-states come apart at the seams as indeed is seen in many Western democracies. Observing why and how individuals lose identity and how they try to retrieve it provides insight into the dysfunction of Western political systems.

My own country, Denmark, corroborates such behavior. After the end of the occupation of 1940–45 by Nazi Germany, politicians appealed to maintain unity and cohesion shown during the occupation. In vain. But it did not take long for fissures to reappear and dominate politics.

Brexit displays a similar pattern. Politicians in favor of leaving European Union like refer to the spirit of “can-do” that carried Britain through the war rallying the people behind defense against a common enemy.

Before World War I and II, the European nation-states depicted each other as enemies—Germany against France, Russia against Germany, and so on. When they started to cooperate after World War II, the Cold War conveniently offered a substitute enemy in the form of the Soviet Union with an alternative societal model (an authoritarian political system and centrally planned economy) without which it is highly doubtful whether European integration had taken off.

Until the early 1990s, the world was insecure, and the threat of war routinely loomed. For the majority of people, it was, however, overshadowed by a sense of being safe because they were surrounded by fellow citizens adopting similar lifestyles. They knew exactly how their neighbor would react. Daily life was predictable. When meeting and communicating, they knew how other human beings would react. Everybody lived in a secure and stable world with own and fellow citizens’ identity clearly defined—and the same! In a cultural and behavioral sense, it was close to a stationary world.

Today, one of the strongest threads of nationality combined with identity is found in China as it sees itself surrounded by potential or real enemies. There are few friends among the fourteen countries with whom China shares its land border. Moreover, history has demonstrated that what comes from the seas more often than not constitutes a threat.

Additionally, Russia has over the preceding two decades depicted the West as an enemy while putting terrorists from minorities in the same box—offering the Russians a clear picture of enemies and how they threaten the Russian identity.

In comparison, the United States shares a land border with Canada and Mexico which, despite squabbles, hardly qualifies as enemies and have seen the Pacific and the Atlantic Ocean as gateways to the world. Not surprisingly it is difficult to define an American identity that is at least comparable to what is seen in China or the identities forged by centuries in the old European nation-states.

When enemies or rivals disappear, it results in people losing identity. They subconsciously look out for opponents—or create new ones—in a drive for security and balance in their daily life.

In many cases, they find them inside the nation-state. Where else could they come from? In Western Europe, the attitude to immigration fits this pattern. Suddenly Europeans face a large number of people next door or in their neighborhood who behave differently and adhere to other cultural norms. Their identity is under threat and they start to defend it by voicing opposition to immigration. They may even feel more comfortable defending their identity than trying to integrate the migrants who likewise feel comfortable defending their identity.

The well-known and applauded goals of domestic stability, a good economy, and no external enemies was supposed to deliver a high level of happiness, well-being, and satisfaction. But they aren’t. Apparently, people lose their identity, feel disoriented and baffled in such an environment.

The lesson is that politicians must “deliver” confrontations and low-level conflicts, which will allow people to define their identity and turn away from populism. If politicians are successful, people will realize why they live in a society with common and shared values different from those chosen by people outside the society—the real or potential “enemy.” The next step will be to manage these confrontations and crises at a level where they do not escalate into a genuine threat but are still visible and realistic. This resembles the policy pursued by America and Western Europe—probably also the Soviet Union—during the Cold War; a period that now, paradoxically, almost looks stable and predictable compared to the world as it is today.

The alternative is that people create their own opponents as happens in some European nation-states (the United Kingdom with Brexit, Germany with immigrants, and the widespread view among people in some EU member states of “Brussels” as the originator of everything “wrong”). The implication is that power slips out of the hands of politicians. The door opens for mediocre or low-quality politicians to be followed by populism wrapped in xenophobia. The danger is that such a situation could escalate into real and self-sustaining conflicts derailing the political structure of the Western democracies.

Joergen Oerstroem Moeller is a former state-secretary for the Royal Danish Foreign Ministry. His is also a visiting senior fellow at the ISEAS Yusof Ishak Institute in Singapore.