The Coronavirus Crisis Has Just Begun 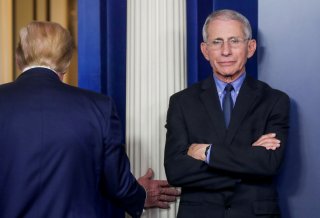 While much of Washington engages in a fierce debate about whether Trump’s declared hope of getting America “back to work” by Easter is foolish or a prudent risk, a potentially weightier issue remains unaddressed: what’s going to happen to our country after this initial wave washes over later this summer? If we don’t start—right now—to make crucial decisions and start preparing for what comes next, we’ll be caught just as unprepared this fall as we were for the first wave.

Whether consciously or not, the prevailing mindset among most leaders and decisionmakers is how the United States is going to get through the next month or two, how the stock market performs, and how fast Americans can get back to normal. But that’s not how this is going to work. Many seem to view the situation as analogous to the troublesome government shutdowns of recent years.

Once the political disputes are resolved (usually over a budget that needs to be passed), the underlying cause of the disruptions are over and things get back to normal. This situation won’t be like that: even passing a huge stimulus bill won’t be enough because the underlying cause of the disruption—the coronavirus—will still exist and continue to be a threat. Until we have a mass-deployable vaccine, likely not until summer 2021, our population will continue to be vulnerable to subsequent waves of the coronavirus.

We don’t have the luxury of dealing with the near-term and later-term challenges sequentially, however. We’ve got to deal with the immediate crisis and begin preparation for what comes next simultaneously. The last truly global pandemic, the Spanish Flu of 1918, provided lethal evidence of what can happen if leaders believe there will only be one wave and don’t prepare for the second.

The first recorded cases of Spanish Flu were first documented in the United States on March 4, 1918, at Fort Riley, Kansas, where U.S. troops were preparing to deploy to Europe to fight in World War I. At first, doctors thought some of the troops were merely suffering from regular flu. Only a few patients died.

As the Americans flooded Europe in April and May 1918, the virus spread everywhere the Americans embarked: England, France, Spain and Italy. Almost three-quarters of the French military was stricken with the flu that spring and nearly half of British troops. Yet most of those afflicted suffered a spike in temperature but were back to normal within about three days. Mortality rates were similar to seasonal flu.

Reported cases began to wane as the summer months wore on and by August 2018 it appeared the flu had run its course. The first wave was at an end.  Many experts subsequently came to believe that about this time the flu mutated, however, and beginning in September, the number of cases and the mortality rates skyrocketed.  The second wave had begun.

In October alone, the United States suffered a staggering 195,000 deaths.  The total U.S. death toll stood at more than 675,000 by the end of 1919; an estimated 50 million worldwide. There are many reasons the second wave of the Spanish Flu was so catastrophic, many of which don’t apply to the coronavirus situation.

Yet in terms of what’s going to come next for Americans, this one fact cannot be dismissed: until there is a cure for coronavirus or a society-wide available vaccine, we are going to remain as susceptible to subsequent waves as we were to this first wave. That raises troubling questions regarding our current efforts to keep our people safe and limit the long-term damage to our economy.

We couldn’t survive as a nation if we all remained cloistered in our homes for eighteen months. It is a requirement that we get the country back in business as soon as it is practical. Yet we cannot make decisions on the premise that once we get through this first wave we can get back to life as normal, because if we did – reopening venues featuring large audiences such as churches, Broadway plays, NBA games, pro baseball, college sports, movie theaters, etc.—we would be super-charging the potential for subsequent waves, expanding the death toll.

We need our top medical officials and economic experts, right now, to be wargaming various scenarios and forming multiple contingency plans. We need to answer a number of critical questions, such as:

If new outbreaks emerge in the fall, then how long will America be able to keep schools open before shuddering their doors again? And what will be the criteria for making that decision? What if the NFL and college football seasons both have to be canceled? College football has enormous economic implications for scores of colleges and universities and NFL clubs provide hundreds of millions in economic benefit to their respective cities.

Already the NCAA lost an estimated $1 billion in ad revenue alone with the cancelation of this year’s March Madness basketball tournament and the NBA has likewise lost an estimated $1 billion. Those losses impact entire economic systems, not merely individual schools, pro sports teams, or wealthy owners. Literally thousands of people lost their jobs when these major events were canceled—and that was just one basketball tournament and one professional sport.

For at least the next year, even after we’ve recovered from the first wave, we’ll have to engage in the limited lifting of “social distancing” measures. When new outbreaks occur, we’ll have to execute something like “rolling blackouts” whereby we temporarily cancel certain activities or partially shut down targeted regions until the outbreak is again reduced.

But because everything is so interconnected in twenty-first-century America, it will be extremely difficult to prevent a limited shutdown in one place from having cascading negative effects on many others. It will be next to impossible to maintain any amount of continuity in education, sports teams, grocery store operations, keep people employed in movie theaters, bars, restaurants, and a great many other industries. Yet that is the reality we’re going to confront even after these current restrictions have been lifted. Consider the ramifications of these chaotic disruptions on the economy.

We have just passed a historically large $2.2 trillion stimulus package to help our population ride out this first wave.  Prior to the onset of this virus, we were already trending towards $1 trillion annual budget deficits that would continue for the foreseeable future to pile on today’s $23.6 trillion national debt—and we had built that debt with a historically good, healthy, and growing economy. The stress on the U.S. economy and national debt will now increase dramatically in ways that cannot yet be fully calculated.

It took the better part of ten years to get back to a semblance of economic normalcy after the Great Recession of 2008.  This coronavirus-powered shock to our nation will likely take far longer. The only way America is going to be able to limit that damage and speed to a new normal is to start, right now, putting the country’s best medical and economic minds on forming a viable plan for what comes next.  If we don’t, then the consequences of our unpreparedness for the first wave could end up looking tame in comparison to the one that afflicts us this fall.

Daniel L. Davis is a former lieutenant colonel in the U.S. Army who retired in 2015 after twenty-one years, including four combat deployments. The views shared in this article are those of the author alone and do not reflect the opinions of any organization. Follow him @DanielLDavis1.