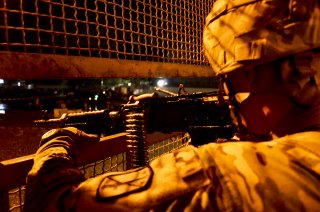 For the better part of the past two decades, the United States has indulgently and counterproductively wasted over $6 trillion and thousands of lives on unnecessary wars abroad. The towering costs imposed on our country by coronavirus now exposes how Washington's skewed priorities left the nation fragile internally and vulnerable to a crisis. For our own security, it is time to end these pointless drains on our resources and prioritize strengthening America.

The most egregious examples of our expensive and unnecessary military deployments abroad are the combat operations in Iraq, Syria, Afghanistan, and Africa. The Department of Defense will receive $165 billion in overseas contingency operations funding for Fiscal Year 2020 alone. These operations will include a total of over 93,000 troops (including regional support troops).  Those are staggering numbers.

They are also wholly unnecessary. There are no security threats to America in Iraq, Syria, Afghanistan or Africa that in any way justify such expenses.  Up until now, these costs have had virtually no impact on the population at large. With the mounting costs as a result of coronavirus, however, it is clear we can no longer afford the luxury of burning money on peripheral military missions.

Even after Congress passed an unprecedented $2 trillion stimulus package in response to COVID-19, the hit to our economy will not be quickly repaired.

This stimulus package barely addresses the huge and expanding problem of a health care system struggling to cope with the exploding costs of providing care for so many seriously ill people. There are shortages of personal protective equipment necessary for medical professionals, large-scale testing remains a challenge, and in some locations finding enough hospital beds for ICU patients is almost at the breaking point.

Despite the clear and present danger coronavirus poses to millions of our citizens, there are some in Washington who want to continue pushing the thoroughly discredited “maximum pressure” campaign against Iran, unnecessarily inflaming tensions with a country that poses a minimal threat to America. This situation is even worse than the possibility of wasting resources desperately needed at home, it puts American servicemen and women in Iraq and Syria at almost daily risk of their lives–and the potential to get us dragged into a new war.

The architects of the maximum pressure campaign against Tehran have long promised that it would moderate Iran’s behavior, that it would compel them to restrain their malevolent behavior, and that it would increase the chances of crafting a new, better deal. The result has been precisely and dramatically the opposite.

Despite the crippling sanctions and the devastation caused to their economy, Iran is now openly ramping up its nuclear development activities, is engaging in risky behavior in the region, and is presently unwilling even to consider diplomacy until we relieve sanctions.  The more we push, the further from a resolution we get and the higher the chances that a miscalculation on someone’s part inadvertently drags America into a war it neither needs nor wants.

The Iraq and Afghanistan wars have been exceedingly expensive, but a conflict with Iran would be considerably worse and require our country–when it could least afford it–to divert enormous resources and manpower to fighting a wholly unnecessary conflict that would likely drag on many years. Such a war–in the current economic straits–could plunge our country into a depression.

Flatly stated, Iran is no more than a middling power in the region that is more than balanced by its neighbors. Our conventional military and nuclear deterrent could overpower any unprovoked attack Iran may ever consider.  There is no justification, therefore, in maintaining this pointless pressure campaign and risking a war we don’t need.

This pandemic we are facing represents the greatest challenge our country has faced in generations. It will take every ounce of energy and focus we have to navigate these troubled waters. We must wisely use our limited resources to support our domestic needs–and end our addiction to fighting unnecessary forever-wars.