The Cost of Coronavirus: America's Economy Could Become a Victim 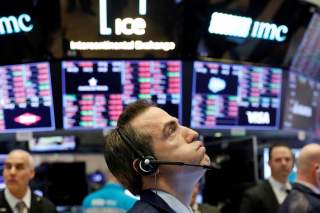 A bloodbath on Wall Street. An oil price war between Russia and Saudi Arabia. And an overdue recession. America is facing a potentially perfect economic storm that could plunge the nation into a recession just as the coronavirus begins to manifest its deadly effects. As bad as things could be in the near-term, the dangers to the country in the long-term could be far worse.

The coronavirus and the near-term social disruption it could cause for millions of Americans is likely going to be serious and severe. Dr. Anthony Fauci, Director of the National Institute of Allergy and Infectious Diseases, warned on Fox News Sunday that it was possible the United States could eventually have to engage in draconian measures such as sealing off entire communities or states. “You know, you don’t want to alarm people,” Fauci said, “but given the spread we’ve seen, you know, anything’s possible.”

Dr. Richard Hatchett, CEO of Coalition for Epidemic Preparedness Innovations, who has been hired by the British government to help develop a vaccine, is more concerned than at any point in his long career.

“I’ve been working on epidemic preparedness for about twenty years. . . . This is the most frightening disease I’ve ever encountered in my career,” he said last Friday on a UK news show. “And that includes Ebola, it includes MERs, it includes SARs.” Researchers from Australian National University went a step further and projected the risk to the United States in a just-released study that described the potential cost in both human and financial terms.

“In the United States, the estimate is 236,000 deaths” in 2020, and the projected cost in lost financial output this year was estimated to be a staggering $1.7 trillion,” the authors explained, based on complex modeling. “With the Centers for Disease Control and Prevention in Washington already advocating Americans consider such mitigating actions, “as school dismissals, event cancellations, [and] social distancing,” the impact on a whole host of industries in the United States could be severe. If coronavirus were the only crisis that the country was grappling with, then the situation would be alarming. Unfortunately, it is being compounded by several other major threats as well.

The Dow Jones closed Monday after dropping more than an astonishing two thousand points, which is the worst since the financial crisis of 2008. The market has been spooked by the global negative impact of the coronavirus and lost more than 4,700 points since January 2. But on the same day, the stock market took such a major hit, oil prices also saw their biggest one-day drop since 1991.

Last weekend, high-ranking officials from Saudi Arabia and Russia failed to come to an agreement on oil production levels in light of the global slowdown in demand caused by the coronavirus pandemic. The two nations are now effectively in a “price war,” which is creating an even greater glut of oil on the market, driving the price further down. For all the angst between the two oil superpowers, they both privately seek to harm American shale oil production with the drop in oil price.

The oil industry was already in trouble because it was going into unsustainably deep debt. For most U.S. oil companies to have a chance to remain profitable, oil has to be at least $40 per barrel; anything lower than that will likely force a reduction in drilling. As of Monday, the price of oil had dropped to $32 per barrel, but Baron’s reported that the price could fall as far as $20 per barrel if the price war continues.

Economic output suppressed as a result of coronavirus countermeasures and the hit to U.S. oil producers will provide additional blows to a U.S. economy that many experts were already saying was fragile and ripe for a recession. It is becoming increasingly possible, however—maybe even likely—that whether this shock or the next unexpected one that will surely come, could expose decades of failures by U.S. leaders to address the mounting financial problem. The cost to America could be devastating.

We were already pressing the limits of economic sustainability when the economy grew by 2.3 percent last year. If this perfect storm of events pummels the U.S. economy into a recession—as is increasingly likely—then the debt and deficit spending could skyrocket to unsustainable levels.

By 2025 debt repayment alone could equal the entire defense budget—and this isn’t even including the trillions of dollars of unfunded requirements that hover above the economy like a sword of Damocles. It’s important to note, however, that Americans have not been powerless victims over the past thirty years as the debt has piled up and their economy has become increasingly rigid. Through inaction, they have done it to themselves.

Both Republicans and Democrats have, Congress after Congress and administration after administration, refused to tackle any of these mounting challenges. Many groups have been giving clear and stark warnings, year after year, while politicians have taken the path of least resistance so that their reelection chances would not be harmed.

To be fair, the fear for their careers, which many congressmen, senators, and presidents share, has not been without validity. Backing policies that would impose near term economic discomfort on voters often costs them on election day.

But as this looming storm of economic woes and coronavirus threat is bringing to light when a full-blown crisis arrives, the cost to remedy the situation won’t be “discomfort” to voters, but serious pain and dislocation. We can’t afford to have elected officials worry about their own careers; we need leadership for our collective good regardless of the cost to them. What are the chances we get such leadership in the near term? Based on recent experience: none.

The political environment post-impeachment in Washington right now is as bad as it has been since the Civil War. Both sides seem intent on using any issue that arises as a weapon with which to bash their opponents rather than trying to solve problems that affect us all. That won’t cut it in this crisis.

However much House Speaker Nancy Pelosi and Trump (and all their followers) dislike each other personally, they must now put their feelings aside and focus on these critical needs of the country. It’s going to take the very best effort of all of them together to solve or the country is going to pay an even greater price to navigate this situation than is likely already going to be necessary.

Daniel L. Davis is a retired lieutenant colonel from the U.S. Army. The opinions shared in this article are those of the author alone and do not reflect the views of any organization.