Could Donald Trump Get Tricked Into Staying in Afghanistan? 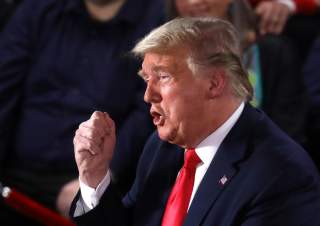 The agreement between the United States and the Taliban is hardly a week-old, and President Donald Trump is already facing strong resistance from the usual suspects deathly allergic to U.S. troop withdrawals wherever they may be.

Politico reported on March 3 that Sen. Lindsey Graham and former Gen. Jack Keane are on yet another personal crusade to persuade Trump to leave a residual U.S. troop presence in Afghanistan, peace deal or no peace deal.

The story quotes unnamed Republican national security hawks who have compared Trump’s deal with the Taliban to Barack Obama’s deal with Iran—a comparison surely meant to scare the White House from implementing the 14-month withdrawal schedule it committed to just last week.

If you don’t know who Graham and Keane are, you should. These are the same two people who met with Trump last October and unrolled a map of Eastern Syria’s oil fields to visually impress upon the president how important those resources were (note: they aren’t important in the slightest). Graham and Keane, fixtures on Fox News, were ideologically resistant to the full U.S. departure from Syria that was ordered by Trump and decided to team up to change the president’s mind. The gambit worked; nearly 5 months after the map session, about 500 U.S. troops remain on the ground in Eastern Syria, where they are basically acting as highly-trained and armed security guards for Exxon-Mobile (when they aren’t drag racing with Russian military vehicles).

We all know Trump is susceptible to flattery, ego-stroking, and bad advice. There have been numerous occasions when Trump has sidelined his otherwise decent instincts when the national security “professionals” approached him with other ideas. They get in his ear, rattle his cage about the political costs on Capitol Hill of executing his America First agenda, and try to use arguments that would appeal to the president personally.

In August 2017, Trump caved to the 4-star generals and increased the U.S. troop level in Afghanistan despite knowing in his gut that such a course was likely to result in more of the same. He even admitted in his public remarks to the nation that he normally likes to trust his instincts, but nevertheless kept them in check and accepted the recommendations of his more establishment advisers. His Iran policy is now held hostage by advisers like Secretary of State Mike Pompeo and State Department envoy Brian Hook, both of whom consistently downgrade the prospects of diplomacy at every waking opportunity (regardless of the president’s openness to talking) and/or unveil red-lines that are such pie-in-the-sky fantasies that the Iranians predictably spurn them. Trump has chosen to get the United States out of Syria several times, only to reverse himself when the temperature got too hot from the Republican political establishment.

The deal with the Taliban aside, it isn’t crazy to think that Trump will take an early-morning phone call from Lindsey Graham and be coaxed into reversing himself yet again after the senator from South Carolina cites the rise in Taliban attacks against Afghan army checkpoints and spouts his usual banter about “fighting the terrorists over there so we don’t have to fight them over here.”  Nor is it a stretch of the imagination to picture Trump watching Sean Hannity one night and coming across somebody like Jack Keane and think twice after the retired general makes a Vietnam analogy. Indeed, Trump may not need Keane to tell him; Defense Secretary Mark Esper is already telling lawmakers that the U.S.-Taliban deal signed last week is hanging on by a thread.

Shaming and/or unnerving Trump into slowing down or blocking troop withdrawals has been a highly effective tactic.  Those of us who find it utterly preposterous that the U.S. military is forever responsible for Afghanistan’s national security need to do our part to balance out the Grahams and Keanes of the world.  Otherwise, we could all be looking at another costly and counterproductive reversal.