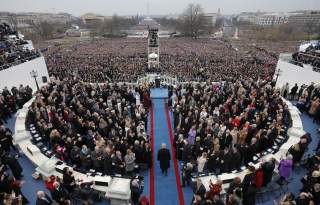 The secret author of the New York Times editorial that blistered Washington on Wednesday boasted that he or she and others within the administration “believe our first duty is to this country,” and that their actions are the “work of the steady state” that provides stability for the nation. They are wrong. Instead, their actions are more closely akin to a creeping coup.

That is pretty strong language and something heretofore unthinkable ever to be associated with the U.S. government. But the action described in this article—and highlighted even more strongly in Bob Woodward’s soon-to-be-released book “Fear”—can hardly be described accurately in any other terms.

The people of the United States legally elected Donald Trump as president in 2016. They didn’t choose any of the other Republican primary candidates or elect Hillary Clinton in the general election—and they didn’t elect the author of this op-ed or any of the other senior administration officials described in Woodward’s book who have taken upon themselves to subvert, change, or ignore the president’s intent.

Don’t get me wrong; there are plenty of things about Trump’s decisions and actions I don’t like and have not hesitated to call out in my own written work or television appearances. But I also didn’t like decisions and actions taken by Obama, Bush, and Clinton before Trump, many of which I felt put America at unnecessary risk. But so far as I am aware, no previous president has had such broad and sustained subversion to his work.

Some may believe that Trump’s intent or decisions are so egregious that thwarting him is justified. That’s certainly the view of the op-ed writer. He or she wrote that during the time an alleged Russian assassination of a former spy on British soil, the president was complaining about being “boxed in” regarding having to expel numerous Russian diplomats in retaliation.

Trump apparently believed that there were better ways to handle the situation and it wasn't worth further harming relations with the country owning the world’s largest nuclear arsenal. Stunningly, however, the author of the opinion piece flatly claimed “[Trump’s] national security team knew better—such actions had to be taken, to hold Moscow accountable.” That is an alarming admission and should trouble every American.

An unelected staff member decided, on their own, that they knew better than the duly elected President of the United States what decision should be made, and took action to obstruct Trump’s decision. We’re talking about a policy choice here, not a legal right and wrong, and that is a crucial difference—and why this condition is so alarming.

When I was in the Army, we had a moral obligation to disobey illegal orders. If, for example, an officer ordered troops to attack a residential area simply because he suspected enemy troops might be there, I would be required by the Uniform Code of Military Justice to disobey that order. Members of the president’s staff likewise have the same moral obligation. But we are equally obligated to obey the legal orders of the president whether we like them or not.

On a practical level, it is not hard to understand that if senior officials in the administration were free to refuse or alter orders of the president on which they felt they “knew better,” America would have chaos. But the biggest danger is that such open acts of defiance undermine the office of the president itself, and represents a creeping coup. Its human nature—once a man believes he knows better than the president and feels free to act on it, he won’t stop. It’s not hard to imagine how things could get worse.

For example, consider what might happen in the genuine possibility that Russian warplanes or ground troops inadvertently fire on and kill American soldiers in Syria (CNN reported on Friday that Russia had warned Washington of this very danger). Trump would face two choices. Either he could order escalation that could bring the United States into open war with Russia that could go nuclear, or he could choose to ratchet down tensions and seek a diplomatic solution, preventing war. But what if hawkish elements in his administration had different views?

What if some of his advisors—as may well be the case—feel that the “only” way to preserve American freedom would be to show strength by retaliating militarily against Russia? Bolstered by the creeping power they had taken in opposition to the president’s wishes on lesser policy matters, they may “box him in” by secretly ordering tactical units in the Middle East to “send a message” and attack some Russian units. The result could be that the United States gets plunged into a war started not by the elected leader of America—who would have chosen to prevent war—but on a small number of men who believed they knew better.

Because they disagreed with Trump’s policy choices, many will cheer on the acts of obstruction described in Woodward’s book or those of this secret author in the New York Times. But they will stop cheering the moment some unelected official changes a Trump policy they liked. Or in the next administration when their favored candidate wins and a new set of officials who believe they “know better” subvert that president.

This behavior is to be condemned in the strongest terms and recognized for what it is, a creeping coup and stopped immediately. If people don’t agree with the president, they can take the legal and ethical moves of publicly resigning and airing their opinions. They can advocate for and support candidates to be president in Trump’s place. What they cannot do, however, is subvert America’s system of government and take matters into their own hands. The United States’ form of government may not survive if Americans don’t immediately put a stop to this.

Daniel L. Davis is a widely published analyst on national security and foreign policy. He retired as a Lt. Col. after twenty-one years in the U.S. Army, including four combat deployments, and is a Foreign Policy Fellow for Defense Priorities and a member of the Center for Defense Information’s Military Advisory Board. Follow him on Twitter @DanielLDavis1.​

The views in this article are those of the author alone and do not represent the views of any organization.

Image: U.S. President-elect Donald Trump arrives for the inauguration ceremonies swearing him in as the 45th president of the United States on the West front of the U.S. Capitol in Washington, U.S., January 20, 2017. REUTERS/Brian Snyder