Cut the Pentagon Budget by Nearly $1 Trillion Over 10 Years 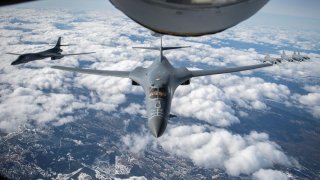 This year the Trump administration requested $1.21 trillion in national security spending, including $740 billion for the Pentagon. The Pentagon also requested an additional $18 billion for a wish list of items that weren’t in its initial request. The coronavirus pandemic exposed what has long been true: America’s defense spending and defense priorities rarely match the actual threats we face.

The economic fallout of the pandemic may force Congress and the Pentagon to make reductions. We should see this as an opportunity to challenge long-held sacred, gold-plated cows. The following are a few immediate opportunities—by no means an exhaustive list—for cuts to garner more than $500 billion in savings over 10 years:

Stop sustainment strategies for operating and maintaining weapon systems that prioritize contractor profits over operational capabilities. The Defense Department spends almost as much on contractors who do everything from providing professional and management support to maintaining and operating weapon systems as they do on goods. In many cases, this results from a model that gives contractors long-term contracts to support systems the military should be able to maintain itself. Even reducing this reliance by 15 percent could save the Pentagon $262.5 billion over 10 years.

Stop centering our war planning around bombers. Centering U.S. strategy around bombers has always been misguided and based on a misreading of military history. The idea that a manned bomber would save the day in a nuclear war is even more preposterous. The same effect can be achieved through ballistic and cruise missiles, or by tactical manned aircraft if necessary, and at a much lower cost. Getting rid of our bombers would save $266 billion over 30 years.

Reduce the number of U.S. troops overseas. The U.S. has garrisoned nearly three-quarters of the globe with approximately 174,000 active-duty troops stationed in 150 countries. Many of these bases were established during the Cold War, which means their strategic relevance ended nearly 30 years ago. The U.S. spends about $51.5 billion annually to build and operate overseas bases. By cutting those costs in half, we would save approximately $250 billion over 10 years.

Stop creating new off-budget accounts. The Overseas Contingency Operations account, the European Deterrence Initiative, and the new Pacific Deterrence Initiative all undermine budget discipline and harm planning. Budget discipline is further undermined by statutory requirements for services and combatant commands to send Congress wish lists for additional items. Eliminating these funds and requirements would save more than $100 billion over 10 years.

Cease creating new space bureaucracies. The new Space Force has already made clear that its mission is to waste taxpayer dollars. It is redundant and undermines effectiveness. Eliminating it could save at least $15 billion over 10 years.

The only way lasting change will happen, however, is by significantly reducing the Pentagon’s budget and forcing leaders to make choices. If budgets continue to climb, there won’t be any incentive for reform—and America’s defense spending pit will threaten the entire federal budget.

This article by Dan Grazier and Mandy Smithberger first appeared at Defense Priorities.