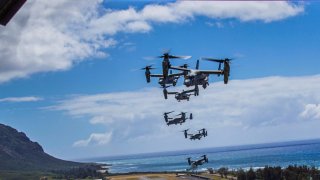 Rather than adopting a strategy of restraint to get savings from the Pentagon, budgetary cuts can be used to produce restraint. A large cut to Pentagon spending could spark an evaluation of priorities and generate support for elements of a restraint strategy otherwise unachievable.

That cut could be the $50 billion annually envisioned by this exercise. It could be the $70 billion now spent every year on the Overseas Contingency Operations budget, which is also roughly the amount of annual added real defense spending since 2016—despite the absence of a new war or strategic rationale. Or it could simply be a cut of 10 percent.

Budgetary savings are usually considered a reward for strategic restraint. You win the debate among wonks, congressional staff, and their bosses and adopt a more restrained strategy and then gather savings by shedding missions, force structure, and its associated operational costs.

This approach may be an unattainable ideal. Budget cuts tend to come about for a variety of economic and political reasons. And because strategy reflects entrenched political interests, it rarely shifts. It changes when enemies or resource constraints force reprioritization, and even then, with difficulty. Demands that budget cuts follow from revised strategy are often a stalling tactic adopted to protect the status quo.

The United States could be safer—while saving a fortune—through a more restrained strategy that forced allies to do more for themselves and saw less need for prolonged wars and global policing. But one need not agree with that strategy entirely to agree that big cuts make sense. One might just note that the world’s most powerful could spend way less than $750 billion to stay safe. Or you might just agree that coronavirus has created an explosion of domestic spending and debt that suggests future spending cuts. The pandemic has also reminded us that defense spending, which is now higher in real terms than at almost any point in the Cold War, does far less to actually secure Americans than many other uses of tax dollars.

Big threats, like the 1950s Soviet Union, heighten strategic consensus. But even then, there was considerable discord about how to combat the threat. The United States is rich and powerful enough to confuse whatever it wants abroad with “security” and eschew strategy: prioritizing among threats and responses. U.S. strategy documents tend to list desires that serve to protect Pentagon constituencies and prevent conflict among them. In that sense they function more to prevent strategy than to create it.

The danger is that cuts push service chiefs to ally so that pain is equally distributed. That is basically what occurred in the 1990s and in the 2010s. Those recent cuts, which were imposed by the 2011 Budget Control Act, initially seemed likely to result in some movement toward restraint. Pentagon leaders complained they couldn’t execute the nation’s security strategy without more money than the caps allowed. In 2012, the Obama administration began a limited strategic pruning, saying it would reduce force structure in Europe and shrink ground forces in anticipation of avoiding large counterinsurgency campaigns.

But a bipartisan consensus let the Pentagon off the hook by raising caps and funding its operations through the so-called war budget. High budgets essentially blocked the impetus to restrain strategic ambitions.

There is an old saying: “Show me your budget, and I’ll tell you your strategy.” While cuts need not wait on strategy, a strategy of sorts is useful for leaders to guide them. When a Pentagon cut provokes bureaucratic battles, civilian leaders should intervene to prevent equal distribution of pain by picking some winners. Beneficiaries of change will help advocate it. Likewise, the movement of defense largesse to interests outside the Pentagon creates incentives for recipients to promote cuts and justify them with restraint. DoD budget cuts can build support for a strategy of restraint.

This first appeared at Defense Priorities.