The Danger of Labeling the Muslim Brotherhood as a Terrorist Organization 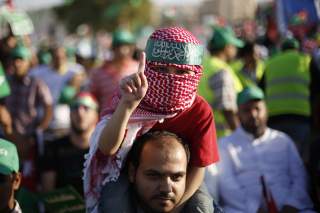 President Donald Trump announced in April that he supported designating the Muslim Brotherhood, a prominent international Islamist movement, as a Foreign Terrorist Organization (FTO). This decision has proven to be highly controversial due to the lack of legal justification for the designation, the repercussions for U.S. regional interests, and the absence of any strategic gains from adopting such a policy. Steven Brooke, an assistant professor at the University of Louisville, and Brian Katulis, a senior fellow at the Center for American Progress, spoke at length about the impact of this decision at a luncheon hosted by the Center for the National Interest on June 6.

During the event, two central themes were discussed: the integral role of the Muslim Brotherhood in the countries that they operate in, and the consequences of the designation on U.S. foreign policy. The FTO designation would, in effect, impose wide-ranging economic and travel sanctions on companies and individuals who interact with the Brotherhood. There are fears among policymakers that governments which oppose the Brotherhood, such as in Egypt, would use the decision to justify their repressive policies against the group by confiscating their assets and driving them underground. With this in mind, there was a consensus by the panelists that the Trump administration’s efforts to designate the Muslim Brotherhood as an FTO were misguided and counterproductive. This also revealed a lack of understanding by the current administration about how the FTO designation would significantly affect U.S. regional policy.

Katulis explained that over the last five to six years, multipolar competition among regional actors in the Middle East has been intensifying and that the Brotherhood is a core part of this competition. As such, any policy adopted by the U.S. government should take into account this ongoing rivalry for regional hegemony and political legitimacy. The political success of the Egyptian Brotherhood and their removal from power in a military coup on 2013 were indicative of the role of identity and representation in the country.

A persistent problem for American policymakers is a lack of strategic understanding of political Islamist groups and how they factor into regional power politics. This is primarily due to the trauma of 9/11, which led the United States to take a hardline approach towards all Islamist groups. Developing an effective U.S. strategy for the Middle East requires understanding the ideologies of these groups. For example, in the wider Middle East, three blocs have arisen. The first is a Qatari-led pro-Islamist bloc that seeks to accommodate Islamist groups in their political systems, such as Turkey, Jordan, and Kuwait. The second is the Iranian-led bloc that aims to extend Iranian influence in the Middle East and Persian Gulf. The third bloc is led by the Saudis, Emiratis, and Egyptians, and aims to simultaneously curtail the influence of the Brotherhood and contain Iran’s influence.

Due to this complicated web of rivalries, political fragmentation has arisen in the region, and with it, a lack of consensus about regional hegemony and the role of the Brotherhood. While the Obama administration tried to change course and engage Islamist political groups such as the Brotherhood within existing political frameworks, the Trump administration’s strategy, supported by hardliners such as Secretary of State Mike Pompeo and National Security Advisor John Bolton, has instead resorted to combatting Islamist groups regardless of whether they eschew violence. This policy has acquiesced to more militant positions of the Trump administration’s anti-Brotherhood regional allies in the Saudi-led bloc. If Trump officially designates the Brotherhood as an FTO, then it would be less out of strategic necessity and more out of accommodation of the Saudi-led bloc’s regional ambitions. Adding another layer of complexity is what Katulis identified as the influence of the “extreme Islamophobic political strand” that has been gaining traction in U.S. politics, as well as continuous lobbying by anti-Brotherhood actors in the Middle East. The designation would accelerate the fragmentation of the region and harden the policies of the anti-Brotherhood bloc.

The current approach is, however, disconnected from the reality of how the Muslim Brotherhood operates. Brooke and Katulis argued that the movement lacks a central structure; it has devolved into a series of independent but related groups whose strategies are colored by the national circumstances of the countries that they operate in. Katulis also emphasized that even though the Brotherhood is a regressive force across the region, a blanket ban on the organization as a whole should be reserved for those branches that commit violence, such as Hamas. In Kuwait, Jordan, Tunisia, Morocco, Turkey, Iraq—and to a more limited degree, Bahrain—Brotherhood-linked political parties are active participants in their political systems. In any case, it is generally agreed among legal scholars that the Brotherhood cannot be designated as a terrorist group since the group disavowed violence decades ago and has been actively engaged in the democratic process. Taking all of these factors into account, it makes no sense for the United States to designate the entire movement as a terrorist organization.

There is also a humanitarian aspect to all of this that must be accounted for. According to Brooke, there is a popular misconception that the Brotherhood is funded by wealthy external patrons or through institutional means like the zakat (religiously obligated donations); this is incorrect. Instead, the Brotherhood generates much of its revenue by providing social services such as medical care and private education, and it extends these services to anyone who is willing to use them, regardless of religious or political affiliations. Apart from availability, these services provide high-quality care, are widely seen as not corrupt, and are respected for their humane and professional treatment of their patients and clients. Brooke accentuated this point by pointing out that 95 percent of Egyptian hospital patients who used Brotherhood-affiliated medical facilities paid in cash for their services, which in turn provide the organization with the revenue stream needed to support its operations despite the seizure of their assets and accounts by the Egyptian government.

Should these facilities be shut down, then the negative impact would disproportionately affect the poor that rely on their services. On this point, both panelists agreed that designating the Brotherhood as an FTO could elicit a strong anti-American backlash and prompt those who rely on the Brotherhood’s social services to view America as an enemy. To them, the designation might look like a vehicle designed to help the Egyptian government further disenfranchise them.

If the United States wishes to effectively counter the Brotherhood’s regressive ideology, then it instead should concentrate on a strategy of confronting the Brotherhood through the exchange of ideas in the countries and societies where the Brotherhood is powerful, while also militarily confronting terrorist groups. This would be difficult to do though due to the lack of freedom of speech and movement in the region, regardless of who is in charge. Yet, for the time being, the consensus between the two speakers was that there are little to no benefits to this proposed action, and a substantial amount of risk involved. They concluded, therefore, that Trump should not pursue an FTO designation against the Muslim Brotherhood.

Joe Boueiz is an intern for the Middle East Studies Program at the Center for the National Interest. He is currently doing his Masters in Global Policy Studies at the Lyndon B. Johnson School of Public Affairs at the University of Texas at Austin, specializing in Middle East affairs, regional security, terrorism, and the foreign policies of emerging and developing nations in the MENA region.