Is the DC Metro Destined for Death? 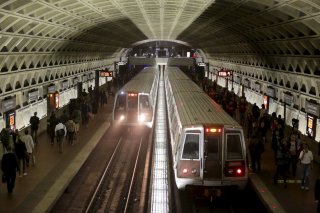 Highway traffic in the Washington DC metro area returned to 80 percent of its pre‐​pandemic levels in July, but DC transit carried only 16 percent as many riders as it did in July 2019. Metro’s own surveys have found that most of its riders don’t plan to return until and unless an effective COVID vaccine is found.

Given this, there is no better time to simply shut down the Metro rail system, thus saving taxpayers billions of dollars. Conceived with racist assumptions and faulty financial projections, the system has proved to be a financial and operational disaster. The region would do better rely more on cars and, in some places, buses.

When the system was originally designed, planners knew it would cost more than buses so they planned to build lines only into white neighborhoods because they figured blacks wouldn’t be able to afford the fares. When blacks objected, a line built into black neighborhoods in Anacostia was followed by a concerted effort by the DC government to gentrify the neighborhoods, forcing many families out.

Despite the high incomes of transit riders, fares don’t come close to covering the costs of running the system. As author Zachary Schrag documents in his book, The Great Society Subway, the original planners of the 103‐​mile rail system expected that fare revenues would cover 100 percent of operating costs and 80 percent of capital costs. As of 2018, fares covered barely half the operating costs and have paid for none of the capital costs, which turned out to be four times greater than anticipated.

The federal and local governments dealt with high costs by having the federal government pay most of the capital costs while local governments paid most of the operating subsidies. What neither took into account was that rail systems must be completely rebuilt about every 30 years. Metro’s staff warned as early as 2002 that the system would need billions for capital replacement over the next decade, but no one came up with the money.

Meanwhile, the system decayed as predicted. In 2009, when the computerized signaling system that kept trains from crashing into one another failed, a crash killed nine people. Metro’s response to was to turn off the computers and let train operators, whose previous job had mainly been to open and close doors at the stations, drive the trains, resulting in jerky service and more crashes. When smoke in the tunnels from worn‐​out insulators killed a passenger in 2015, Metro’s response was to shut down its lines to inspect all of the insulators. But the fundamental problem of worn‐​out equipment remains, with at least two further smoke incidents in the last year alone.

The National Transportation Safety Board’s report on the 2009 crash criticized Metro’s “lack of a safety culture.” More than a decade later, that hasn’t changed. A safety audit published last week by the Washington Metrorail Safety Commission found that the agency still did not have a safety culture.

Metro often had rail operations employees working longer hours than specified by its own safety guidelines. It allowed employees to work with broken equipment and sometimes attempted “to manipulate safety event investigations that create unacceptable safety risks.” Metro, added the audit, was a “toxic culture workplace” that “includes racial and sexual comments, harassment, and other unprofessional behavior.”

When Metro’s current CEO, Paul Wiedefeld, took the job in November 2015, he promised to improve the safety culture. Instead, he has been besieged by revenue and budgetary problems that were made worse by the coronavirus. Last week, Metro released a budgetary report to its board projecting that–despite having received nearly a billion dollars from the CARES Act–it would have to cut 39 bus lines, reduce service on all the rail lines, and make numerous other cuts just to finish its current fiscal year–and the agency has no idea how it will continue operating next year unless the federal government provides another bailout.

All of these problems show that the region can’t afford to keep running the trains and will have to shut them down sooner or later. Given the few number of riders being carried at present, the best time to do so is now when it will cause the least disruption.

This article was first published by the Cato Institute.