Debt Bomb Ready to Blow: The Greatest Threat to America (All in One Chart) 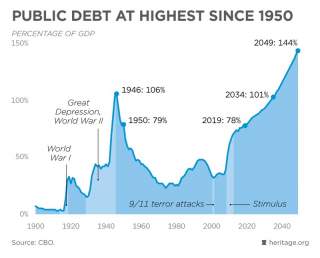 There’s a constant whine throughout Washington D.C. that there’s nothing Republicans and Democrats can agree on. They’re so opposed on every issue, that there’s no more bipartisanship. However, going back at least forty years, there’s one policy that both parties are determined not to change: growing the U.S. national debt.

The debt currently stands at a steadily increasing $22,925,000,000,000. A person could spend hours staring at the debt clock as tens of thousands of dollars are added every second. But they’re more than just numbers on a screen. Their the financial future of this nation, the future looks bleaker than ever.

The highest debt-to-GDP ratio in American history was in 1946, just after the end of the second world war. Our debt equaled 104% of our gross domestic product. From this peak, it declined as a percentage until the 1980s, where it began growing again. This was primarily due to President Ronald Reagan’s military buildup, which increased the Pentagon’s budget by 35%. This budget-busting action led to the resignation of Reagan’s Director of the Office of Management and Budget David Stockman.

Comparatively, there are dozens of nations that currently have a worse debt-to-GDP percentage than the United States. However, we hold the largest public debt in the world, and as the world’s reserve currency, there’s a lot more riding on our financial health than other, minor countries.

As explained by Stein’s Law, there will inevitably come a tipping point. Our debt will be too much for the market to bear, and there will be a crisis of Armageddon level proportions. The two solutions will be to repudiate it and refuse to pay or inflate the money supply to Zimbabwean infinity.

Since the unavoidable result of this calamity will be the implosion of the American economy and the livelihoods of several hundred million citizens, it’ll affect foreign affairs as well. Overseas military operations and America’s global network of bases will be impossible to sustain. Like U.S. withdrawal from northern Syria it will be sudden and haphazard but repeated on every part of the globe simultaneously.

“The most significant threat to our national security is our debt,” former Chairman of the Joint Chiefs of Staff in 2010.

In fact, the greatest threat to everything is our national debt. The reason for this is because it's unfixable. Republicans and Democrats have gone to Washington, D.C. for decades on promises of balanced budget amendments, increased revenue, and decreased spending. In David Stockman’s eyes, both massive cuts to spending and tax increases are required to make any dent in the problem.

However, nothing has materialized because there’s no constituency in this country for short-term pain in exchange for long-term relief. Both parties in recent electoral cycles have opted to ignore it entirely, without even the façade of broken promises.

There’s no preventing a debt crisis. Prepare yourself accordingly.

Image courtesy of the Heritage Foundation.