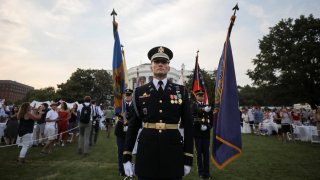 Cutting the defense budget to restrain American foreign policy is a way to avoid truly hard choices and set clear priorities. In 2018, the National Defense Strategy cautioned “failure to meet our defense objectives will result in decreasing U.S. global influence, eroding cohesion among allies and partners, and reduced access to markets that will contribute to a decline in our prosperity and standard of living.” Just because the U.S. can cut the defense budget by $500 billion over 10 years does not mean that it should.

Facing the coronavirus pandemic, climbing national debt, frustrating acquisition failures, and unresolved domestic spending debates, it is understandable for policymakers to search for savings. Unfortunately, it is typical Washington behavior to target first the defense budget. But the peace doesn’t keep itself. Safety at home and security protection abroad are not zero sum outcomes.

China will likely remain the pacing threat for the United States throughout the decade. Even after shedding a half trillion dollars in defense spending, the U.S. could still compete with China—but it would be a Sisyphean task. Army and Marine Corps active duty end strength could be reduced, favoring the naval and air power demands of operations in the Pacific. Ambitiously, nearly 150,000 billet reductions could be identified in infantry, Stryker, and aviation brigades—along with corps and above headquarters, for example. This would scale back brigades deployed or stationed in the Middle East and Europe and reduce training units.

Submarines, bombers, and fighters will be prioritized. Heavy ground forces should be cut steeply. The F-35 program should end in 2024 in exchange for longer range bombers. The Navy could deemphasize aircraft carriers, using cheaper platforms, like barges and small surface ships—such as the FFG(X) frigate and Littoral Combat Ship—as basic launch platforms for advanced missiles, holding China’s more expensive platforms at risk in its near seas. Ruthless retirement and divestment schedules could also be implemented for legacy programs to save maintenance dollars, while ordering more platforms like the F-15EX that incorporate new capabilities into old assets.

The U.S. could give up nuclear modernization and cut the ICBM missile force, as China currently does not have the capabilities or capacity to pose a serious threat to the other legs of the nuclear triad. This could feasibly save around $20 billion, though the continued deterioration of the triad will ultimately cost more later.

Here is what such haphazard and un-strategic choices will achieve: a hobbled and hollow force; a new era of nuclear proliferation; an emboldened Russia, China, and Iran; frustrated U.S. allies in Europe, the Middle East, and the Indo-Pacific; the destruction of domestic manufacturing industries; supply chain failures; and an isolated, less prosperous United States. In 2013, scholars from Dartmouth and Princeton wrote that “a world with a disengaged United States is the devil we don’t know,” but that is only partly true. We know its features.

Iran is making progress toward a nuclear program, and the U.S. will likely be driven out of Iraq. Africa is gripped by instability. Russia is pressuring Romania, retaining a position in Syria, and interfering in democratic elections in Europe and America. China has clear ambitions on Taiwan that will be achievable absent an effective American deterrent. Without forward-based forces in Europe, the U.S. undercuts its ability to quickly respond to crises in the Middle East and Africa. Without a modernized nuclear arsenal at the bargaining table, the next administration will be unable to negotiate a new arms control regime.

Defense budget cuts at this scale are not fiscally responsible. They are political theater that makes politicians feel good for “saving” money but actually reduce security and ultimately prosperity.

This article by MacKenzie Eaglen first appeared in Defense Priorities.