Is Donald Trump About to Attack Iran? 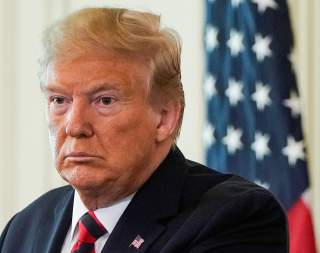 A few weeks ago, it looked as if U.S. President Donald Trump would see out the decade quietly. Partially vindicated by the Mueller probe, heading into a re-election effort, and seeking deals on Afghanistan, China, even Iran, it seemed as if the fierier moments of the Trump White House were in the rearview.

But the firing of national security advisor John R. Bolton and continued flare-ups in the geopolitical cauldron of the Middle East has scrambled the map. Bolton’s successor, Robert C. O’Brien, is an Iran hawk who lambasted Barack Obama’s nuclear deal with Tehran as “Obama’s folly.”

On the agenda: ever more sanctions on the regime in Tehran. Friday brought news, after the president ordered it, of a fresh round. “In a failed attempt to disrupt the global economy, the Islamic Republic of Iran attacked the Kingdom of Saudi Arabia,” Pompeo said in a statement Friday, referring to a recent, alleged Iranian action on Saudi oil equipment.

Referring to Iran, Pompeo said Friday: “This act of aggression was sophisticated in its planning and brazen in its execution … Attacking other nations and disrupting the global economy has a price. … The United States has sanctioned Iran’s Central Bank and its National Development Fund.”

“Really seems like they’ve squeezed them dry,” a Defense official said, on sanctions on Iran, while characterizing the post-Bolton Pompeo as the “heaviest operator in foreign policy.” That’s an open question: how much more can the United States financially pound the Mullahs?

Others say that’s nonsense. A former senior administration official insisted Friday that “economic war” must continue and that, on sanctions, “we haven’t even started.”

But the U.S. has plodded along on the sanctions course for over a year with little tangible results on the ground in Iran. The administration has an uneasy relationship with an official “regime change” policy, but interlocutors, such as leading hawks at the Foundation for the Defense of Democracies (FDD) and former Trump attorney Rudolph Guiliani, associated with the people’s Mujahedin of Iran (MEK), urge America to take the plunge.

A facet of that could be: a strike on Iran the next time it acts up. Trump nixed a military move, in June, at the absolute last minute. Tehran may not be so lucky next time.

Reuel Marc Gerecht of FDD wrote this summer in the Washington Examiner: “An American frontal assault could severely stress the theocracy internally, where it is weakest. ... It would be deeply humbling for the theocracy, which has often ridiculed the United States for being cowardly before Islam and the Islamic Republic, to have America lay low the Revolutionary Guards. The new Guard commander, Hossein Salami, described the United States as… too feeble to fight. He would have to eat considerable crow if Trump sank his navy.”

Foreign Minister Javad Zarif said this week that such a move would spark “all-out war.”

But Tom Rogan in the Examiner this week, in a piece that is getting play in Washington, argued: “That said, Iran is not going to go to all-out war if the U.S. or Saudi military hit a few Iranian oil or Islamic Revolutionary Guard Corps facilities. As with Israel, even the Iranian hard-liner faction aligned under the revolutionary guards knows that an all-out war with the United States would destroy them.”

Zarif, and his superior, President Hassan Rouhani head to New York next week for the United States. In doing so, the duo will visit an America headed by a president who said this Friday: the United States military is in “tippy top shape” and a military move on Iran would be a “very severe form of winning.”