Donald Trump vs. Joe Biden: Who Gets Hurt the Most Over Ukraine? 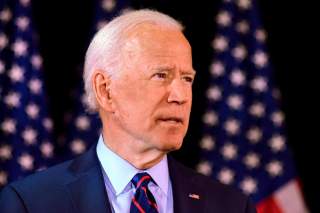 President Donald Trump’s time in office has a distinct feature: it warps time. The dominant scandal du jour can seem like a laughable, distant memory only a month or two later. Remember “Sharpiegate”?

All this is to say is the current imbroglio out of Ukraine could seem like a passing distraction by Halloween. But the odds are against it.

The scandal is more likely a culminating flare-up of the Trump era. The allegation that the president sought to encourage the new man in Kiev to investigate his leading political rival, Joe Biden, threatens to reverse the gains accrued by a relatively tame Mueller report.

The brouhaha over Trump and Ukraine bears all the hallmarks of what observers of the American political theater have become accustomed to in recent years: hard conversations about what actually “foreign interference” entails, disturbing questions about how politicians make money outside of office, and the vulnerability of American democracy in the information age.

Steve Bannon, a former White House chief strategist, told me earlier this week that House Speaker Nancy Pelosi’s close of business announcement Tuesday was the “5 p.m. moment” of Trump’s presidency. He has a point.  Forty-seven percent of respondents in a Hill-HarrisX poll released Friday favored impeachment.

But the Ukraine scandal is a joint one. Murkiness out of a murky part of the world also ensnares Biden himself, the leading presidential challenger on the Democratic side. Biden, a career politician with a history of uneven finances, in concert with his troubled son, Hunter Biden, faces new exposure, particularly around his progeny’s financial dealings in Ukraine. A damning New Yorker portrait of Hunter Biden is again making the rounds this week in Washington. Allies of the president think Ukraine is, on balance, more damaging to Biden, potentially knocking out the president’s most viable rival, while teflon Trump will again escape another close call.

But will he? The president’s sloppiness -- at the very least -- on this matter has resuscitated political forces that were all but banished following the end of the Mueller inquiry. Adam Schiff, the gelid House intelligence chair, is again a ubiquitous presence on cable television. The administration, rather than gearing up for the close of a first term, is again engaged in a battle with the intelligence community. And continued chatter about Trump’s ties to oligarchic figures in the eastern bloc threatens to tar him in the minds of a majority of Americans, even if the associations are, in fact, benign.

And for the Left, replacing Biden will be no light lift. Elizabeth Warren is Biden’s hard-charging, principal opponent. Warren’s stock has spiked in the polls, but the Democrats’ financial allies are deeply uneasy about anointing such a strident critic of their industry. Grandees on Wall Street told CNBC this week that they’ll sit the election out or back a Warren challenger if she’s the nominee. Wall Street backing has been integral to the presidential campaigns of Democrats in recent years, from Barack Obama in 2008 to Hillary Clinton in 2016. The candidate in third place, 2016 runner-up Bernie Sanders, is an avowed socialist, and even more critical of organized money than Warren.

“The sudden impeachment urgency seems to have come from recognition that Dem primary process has veered too far left to produce a viable candidate,” Scott McConnell, founding editor of TAC, said Friday. So it may be end up being Biden, after all, by default. In which case, gear up for fourteen more months of heated speculation on the goings-on out of Ukraine.