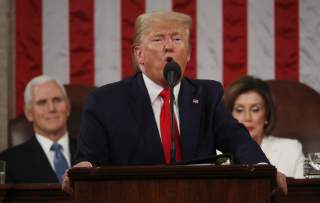 One of the most memorable parts of the 2020 State of the Union was President Trump’s surprise reunification of a military family. “For the past seven months, her husband, Sgt. 1st Class Townsend Williams, has been in Afghanistan on his fourth deployment,” the president said, introducing Amy Williams and her two young children before revealing to thunderous applause that Sgt. Williams was present in the House chamber. A happy moment, but why shouldn’t all military families experience the same joy?

Reuniting one family is good, but what about the tens of thousands of other families still separated by wars Trump could end at any moment? The president talks a good talk about ending “endless wars,” to use a phrase from last year’s SOTU, but he has failed to extricate the United States from a single conflict. The incongruity is indefensible.

Trump has promised, again and again, to finish these misadventures and bring American soldiers home. With three-quarters of this term complete, he is instead pursuing an erratic foreign policy lightly seasoned with the rhetoric of restraint, words belied by a wasteful military build-up and a stagnant prosecution of the very wars he campaigned against. The 2020 SOTU showcased this inconsistency..

The substantive portion of the foreign policy section of the speech was brief: “As we defend American lives, we are working to end American wars in the Middle East. We have made tremendous progress and peace talks are underway. I am not looking to kill hundreds of thousands of people in Afghanistan, many of them totally innocent,” Trump said. “It is also not our function to serve other nations as law enforcement agencies,” he continued. “We are working to finally end America's longest war and bring our troops back home.”

This is all to the good, but what’s the delay? Trump has shown himself more than willing to govern by executive order on issues he deems important, and there is no legal constraint on his ability to “end America’s longest war”—or, indeed, any of our other military interventions in the greater Middle East and North Africa, most notably those in Iraq, Syria, and Yemen.

If the president were sincere in his professed rejection of the United States’ role as world police, if he really wanted to preserve innocent lives in places like Afghanistan (where civilian casualties have hit record highs on his watch), if he had any real intention of bringing our troops back home, he could do so at any time. No one could stop him.

And it would be popular! Polling shows U.S. veterans and the general public alike soured on the wars in Iraq and Afghanistan years ago, and Washington’s illegal meddling in Yemen has never had majority support. Americans’ views on continued intervention in Syria are more changeable and uncertain—veterans, by contrast, are consistent in their negative view of the campaign—but the public hardly demonstrates an appetite for war. On the contrary, survey after survey has found Americans reject the aggressive and reckless interventionism which became the bipartisan norm in Washington in the post-9/11 era.

The president has paid lip service to that desire for peace and reaped the political benefits, but he has steadily refused to match word to deed. Rather than bringing U.S. forces home, he has shuffled them around the Middle East and grown our footprint in Afghanistan and Saudi Arabia.

Rather than prioritizing limited resources to defend vital U.S. interests, he has haphazardly inflated Pentagon spending, mistaking militarism for strategy.

Rather than pushing NATO allies to take responsibility for their own defense, he has expanded U.S. military commitments abroad and unfairly claimed credit for increases in our allies’ defense expenditures which began before he took office.

And rather than deal with troublemaking nations like Iran and North Korea—the latter of which was a glaring omission from this year’s SOTU—with realistic, patient diplomacy, Trump has adopted a dangerous “maximum pressure” policy that has consistently proven counterproductive for U.S. interests and detrimental to the welfare of the very innocent civilians in these countries whom the president claims to support.

Trump could make good on his promises of peace at any moment, and he could do so from a position of legal and political strength. The 2020 State of the Union address made obvious once again that he has chosen not to do it.