An End to Exquisite Weapons 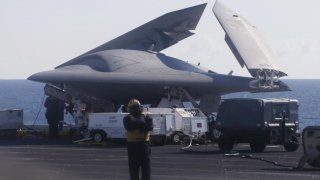 The convergence of new technologies is creating smaller, cheaper, autonomous weapons that challenge America’s arsenal of few, costly, but exquisite weapons. This convergence also presents the nation with an opportunity to field forces that are not only more effective, but also cheaper. By focusing on weapons systems that can be made platform-agnostic—launching from air, sea, or land—the U.S. can forgo the huge expense of many of today’s weapons systems.

This essay is part of a 2020 Defense Priorities symposium on Department of Defense budget cuts. Read more essays in the series here.

The aircraft carrier is the obvious place to start. The USS Ford has cost more than $13 billion to date, and its air wing will cost over $5 billion. Annual operating costs for just the carrier and its air wing are over $1 billion. Unfortunately, the air wing has such short range that it is losing its effectiveness in great power conflict. For one-quarter the price of a carrier and its air wing, the Navy could purchase 40 container ships armed with 2,000 containerized cruise missiles. Not only is there massively less procurement cost, but also the crew for all 40 ships would be less than one-quarter the size of a single carrier and its air wing. Yet these ships can carry a mix of weapons that outrange the air wing by as much as 1,000 miles. Plus, the distributed character of these ships imposes greater targeting costs for a competitor.

Next, the Air Force should cancel its $80 billion B-21 bomber program. By the time this plane is fielded in the late 2020s, commercial satellites will be providing near constant global coverage in visual and IR spectrums, with growing capabilities in radar imagery. No matter how stealthy they are in the air, the bombers will be seen on the ground. With Russia, Israel, and China all selling containerized cruise missile systems, these $800 million aircraft can be destroyed by $1 million cruise missiles launched from merchant ships off U.S. coasts.

DoD’s most expensive program, the F-35, faces three major challenges that cannot be overcome by further investment. The F-35 is too complex to maintain high readiness rates. It suffers from extremely short operational range, which refueling does little to mitigate. And it costs too much to buy and operate given its vulnerability to destruction on the ground by relatively cheap cruise missiles and drones that greatly outrange it.

Since neither drones nor cruise missiles require pilots, the entire pilot training pipeline goes away, along with most of the maintenance personnel needed for these carrier, F-35, and B-21 fleets. It will also reduce the need for aerial tankers which will provide further procurement, operations and maintenance, and personnel savings.

With personnel costs averaging $132,000 per servicemember each year and steadily rising, manpower is a key driver of the military budget. The Marine Corps plans to cut 12,000 Marines, which will save $1.5 billion per year. The other services need to look at similar cuts to preserve their capitalization accounts for a different future.

Finally, the Department of Defense must reconsider the nuclear triad. As noted, bombers are already vulnerable. Missile silos have been vulnerable since the 1980s and serve primarily as missile sumps for a Russian counterforce strike. However, China’s strategic nuclear force appears to be structured for counter value (i.e., city busting) strikes. DoD needs to examine other options, such as Russia’s autonomous nuclear torpedo. If designed to be fired from submarine, surface ship, or land-based launcher, it could provide a second, but much less expensive, leg of the triad. While Russia has limited vulnerable ports, China has many critical ones.

Cutting $50 billion a year from the defense budget will require painful changes and tradeoffs. DoD can stop buying carriers after the Miller. It will still have seven carriers until 2052 and four until 2072. It can cancel the B-21 and seek less vulnerable and vastly cheaper modes of long-range strike. It can cut the F-35 buy by 40 percent or more and replace that capability with autonomous drones and cruise missiles. And it can rethink the nuclear triad. Combined with reasonable personnel cuts, these moves will enable the United States to both save money and be better postured for the next war.

This article by T.X. Hammes first appeared at Defense Priorities.